BETTER HER THAN ME 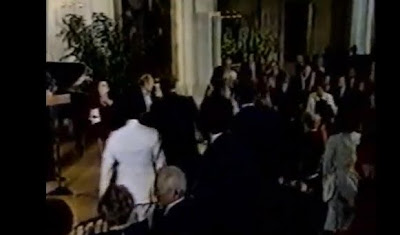 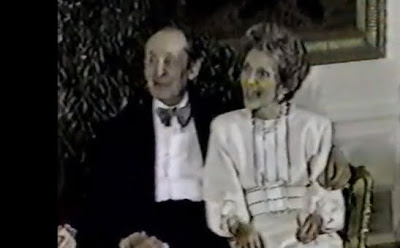 By chance, I came across an amazing video clip on YouTube this morning,* and it brought back a vivid first-hand memory, dating back to 1986, to which my fervent response was, and is: Better Nancy Reagan than me.

That was actually my second thought as I watched the First Lady's chair tip backward off the dais in the East Room, depositing her in the flowerpots. My first thought was that something incomparably more awful had happened. After all, the President was there as well, delivering some graceful concluding remarks to the two hundred of us privileged to hear Vladimir Horowitz's White House recital; his presence, along with the Secret Service, the Marine Guards, the press, inevitably lends a kind of supercharge to the aura of any room he inhabits. So that sudden flurry, the chair toppling, the involuntary gasp from the crowd, the people rushing forward all conjured up a sense of waking nightmare, even fifteen years before 9/11: can something awful be happening? Here? Now?

But the next instant, Mrs. Reagan had bounced up unhurt, and she and the President were quipping away as if they'd rehearsed the whole thing. "Honey, I told you, to do it only if I'm not getting any laughs," he said, and got a big laugh. And smiling, unflustered, unwrinkled, not breathing hard, not flushed, without a stammer, Nancy tossed off a bon mot of her own -- "I guess I livened things up" -- and resumed her seat (her chair having been moved, in the interim, a good two feet from the treacherous edge of the platform). Horowitz locked his left arm around her waist and kept it there until the President had finished his speech, and then, smiling and chatting, the Reagans and the Horowitzes trooped nonchalantly out of the room, leaving the rest of us to buzz.

"I saw it coming," said my wife. "She had on a tight skirt, and she was tugging it down, and the chair was inching backwards at every tug." And that became the Official Version, as reported by The Washington Post and The New York Times the next day. But everyone else had his or her own version, some little detail that non one else had noticed, some explanation, some point of view. It was like Rashomon; no one of us could quite take in the totality of the event we'd just witnessed. It was a leveling experience, though; it restored the democratic balance between the celebrity musicians and politicians, who'd never seen anything like it in all their visits to the White House, and the nobodies (like us) who had lucked into an invitation and were there for the first time. Now, everybody had something to talk about, and if you had had a better sight line than a symphony conductor or a newsweekly publisher, he wanted to know what your angle was.

Nancy (Horwich) and I were there because fate had kindly arranged, forty years earlier, that my family and the Horowitzes should become friends. We've had the good fortune to hear him play many times -- once, several years ago, in Washington, when we came down the morning of the recital and went home as soon as it was over. Could anything could be more special than listening to the greatest living pianist? What would those musicophiles (mostly Russians) who froze all night waiting for a ticket, whose tears streamed down their faces as he played, answer? But such is the human capacity to become inured to blessings that this time, it was the Presidential overtones that set our hearts to beating a little faster.

In some ways, we felt very privileged: just telling the cab driver, "The White House, please -- Visitors' entrance," gave me a charge, though as it turned out, he couldn't find the Visitors' entrance, having been misdirected by a D.C. cop, and we had to walk a quarter of a mile from where we were let off. Next time we'll get a limo, we told each other. But sweeping past the crowds of tourists toward the portico, the heart-stopping moment when the guard holding the Guest List couldn't seem to find our names, showing the requisite identification (our social security numbers having been provided weeks before), all reminded us that this was a special day, a time to soak up the memories and impressions for our daughter and our friends in New York.

Going through White House security (at least in those days) was just a politer version of going through airport security these days. The identification, the metal detector, the handbag search reminded us that this wasn't a routine social or cultural occasion in any way. If I had a sense of being a witness to history on a very small scale, I had a complementary sense that my role was to remain invisible, on my best behavior, while history unfolded. One doesn't go wandering around 1600 Pennsylvania Avenue, thumbing through books and opening closet doors; if you have to the go the bathroom, a Marine major escorts you. Remember being an adolescent, worrying about developing a pimple before the dance, about buying the wrong corsage, or saying the wrong thing, or not being able to say anything at all? My wife was nervous too; an hour before, in the hotel room, trying on and discarding innumerable pairs of pantyhose, she was worried she'd faint if she didn't eat something. Not since my wedding, when I was sure that during the ceremony my knees would lock, pitching me forward onto the rabbi's feet, have I fretted so about keeping countenance. What if I started coughing while Horowitz were playing? Belched? Sneezed on George Schultz’s tie? None of these things was likely, but I could imagine it, everyone slowly turning around and looking at me with an expression of incredulity on their faces.

That was just the expression on the face of the Leader of the Free World when his wife did her back flip into the geraniums. The kind of thing that would surely mortify you if it ever really happened actually did happen -- in the middle of the President's speech -- and to the President's wife! But that, of course, made all the difference. If I'd fallen off my chair, I doubt whether the Chief Executive and I would have shrugged the incident off together with a little exchange of impromptu humor. Nancy Reagan belonged up there; she was in her own home, surrounded by her own guests (though I imagine she'd not met a third of them), and her aplomb undoubtedly stemmed, in part, from her sense of security: if I want to steal the stage from my husband by taking a pratfall while he maunders on, by God, I'll do it! And of course, all those years of social training, of discipline, of learning how to carry off difficult moments with tact, diplomacy, just the right gesture or remark -- they had prepared her superbly for a really juicy example of what the Reader's Digest would probably have called My Most Embarrassing Moment. If it had been me, I'd never have appeared in public again; five minutes later, at the reception, she was laughing about it as if she actually found it funny! I loved her at that moment. By a process of Darwinian selection, the one person in the room who could survive accident, or practical joke, or trick of fate, and actually triumph over it, was the person it happened to. Confirmed atheist though I am, I thought, there is a God. Better -- much, much better -- Mrs. Reagan than me.

*Check out the video yourself: http://www.youtube.com/watch?v=-bA8rb3yka4
Posted by Unknown at 12:40 PM