Now that Al Gore is slimming down for a possible run at the White House, I’ve been thinking about the crucial plank in his platform (not that it’s possible to forget about for more than a few minutes at a time). About a year ago, Jim Hansen reviewed a number of books about global warming (“The Threat to the Planet,” New York Review of Books, July 13, 2006) and concluded that the problem could be neatly solved in the same way that two earlier ecological threats, the potent pesticide DDT and the noxious propellant CFC, were neutralized. Each turned out to be replaceable without severe dislocation, and the ease with which we accepted their replacements has given Hansen what seems to me a false hope for the coming battle.

For oil is part of our national mythology and identity, in the way that CFCs and DDT were not. We never idolized Redi-whip as we do the lights of the Las Vegas strip; no one gathered around the TV to watch bugs die the way Nascar fans do for the Talladega 500. The consortium of government and business interests that is locked into Big Oil is far broader and deeper than the pesticide and CFC lobbies. And it’s going to be a lot harder to find substitutes that work and that are acceptable to all the interest groups on play. Hansen glosses over the possibilities in a single sentence: “In the interim [before new technology is invented and implemented] new electricity requirements should be met by the use of renewable energies such as wind power as well as by nuclear power and other sources that do not produce C02.” That complacent formulation ignores the facts that wind turbines in numbers sufficient to satisfy our voracious appetites for heat and light would probably suck North America halfway across the Atlantic, and that nuclear power has been irrevocably demonized by the political left, from whom we would naturally look for leadership in the struggle against oil and coal. I had a ringside seat at the successful ten-year battle against the Long Island Lighting Company’s attempt to bring its Shoreham reactor on line, and it was a lesson in the law of unintended consequences: the protesters who rejoiced when the power company spent billions on a plant that never opened went home to find the costs folded into astronomical monthly bills, and now depend even more heavily than before on a dwindling supply of electricity generated by fossil fuels.

And speaking of unintended consequences and demonization: over a million African children die each year from malaria, which could be controlled -- indeed, all but eradicated -- by the judicious use of DDT, the best mosquitocide ever invented. Perhaps a more apt analogy for ending our addiction to oil is our battle with addiction to tobacco, which shows us that the only way to end an addiction, unfortunately, is not to throttle it back but to cut it out altogether. But no first-world country will ever wean itself from oil completely, and an America that tries to “cut down” -- in which liberals learn to get along with nukes and conservatives embrace Priuses and buy bicycles -- seems less like a viable vision of the future than a hallucination.
Posted by Unknown at 11:32 AM No comments: 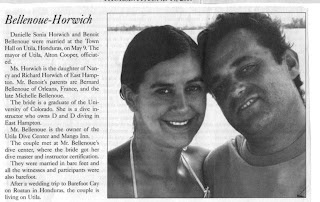 Posted by Unknown at 9:42 AM No comments:

DICK AND NANCY in ROATAN, HONDURAS, 2004 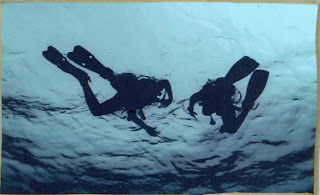 Posted by Unknown at 2:03 PM No comments:

MEA CULPA (and some thoughts about A-Rod and Iraq 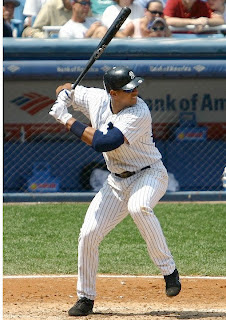 MEA CULPA: What is the point of telling all your friends about your new blog if you don’t post anything on it for two weeks? I plead overwork, congenital laziness, the spectacular golf weather in the Hamptons.

Alex Rodriguez has had either a good or a bad week, depending on your point of view. First he caused an enormous brouhaha in baseball circles by calling something out as he ran to third base behind the Toronto infielder who was about to catch a pop fly that would have ended the ending. The infielder backed off, dropped the ball, and the Yanks scored three more runs.

I have yet to meet anyone who doesn’t have an opinion on the ethics of what A-Rod did – even non-fans. So many questions factor into it: did he yell “Mine,” as the Blue Jays claim, or just “Huh!” as he asserts. Was it a rules infraction (no, as it turns out) or just “bush league,” one of those unspoken prohibitions, an example of bad sportsmanship and advantage-taking (especially since the poor guy who dropped the ball was a rookie, playing his first game in the Bigs).

But that controversy was, if anything, heightened the next day when the Post featured pictures of the Yankee star (who is married) escorting an anonymous blonde to a Toronto strip club after the game.

I have two responses to all this. The play: in hockey or basketball, yelling something to confuse opponents is an accepted part of the game. At the other end of the spectrum, in golf, even clearing your throat while an opponent putts is so not-done that you’d find yourself ostracized at any level of the sport. In baseball itself, some kinds of deception are condoned, as even A-Rod’s detractors point out: on a line drive to the outfield, the shortstop pantomimes fielding a grounder to force the runner on first to slide into second, to keep him from taking third, a play that has been known to result in injuries. And the aforesaid runner, in order to break up a double play, is taught to go after the fielder, not the base; Mike Lowell of Boston, about to be tagged out by Robbie Cano, leveled a block worthy of a linebacker, putting Cano on his seat (though miraculously, he got the throw off in time). As to A-Rod’s extra-marital high-jinks, does it come as news to us that pro athletes on the road enjoy casual sex as one of their many perks? A flight attendant once confided to me that on a charter flight (she wouldn’t tell me what sport or even which team), one of the ballplayers was hitting on her, and when she pointed out that he was wearing a wedding ring, he said, “Well, yeah, I’m married, but I’m not a fanatic about it.” So the issue here seems to be the ethics of sleazy tabloids who have not, in the past, followed athletes around road towns with cameras, recording their preferred modes of winding down after games.

But the larger question that all this leads me to is, why are we (most Americans) more preoccupied with A-Rod and Lindsay Lohan and Brittany and Brangelina than we are with Iraq? Why, as it seems, does everybody have a strong opinion about what goes on on the baseball fields and bars of America, but hardly anyone, even Presidential candidates, speaks with forthright conviction about when and how we should extricate ourselves from Baghdad?

The answer is that baseball practices, adultery, and substance abuse are well-understood. The rules of baseball are known and finite; the conventions of behavior have been established over the course of a century; most male and many female Americans have played baseball or softball, so we’re all operating in a known field of discourse. You never hear it said of baseball, as it is said daily of Iraq, that it is a “quagmire,” a “black hole,” a “no-win situation, a “zero-sum game.” In Iraq, we’re passengers strapped into uncomfortable seats in the economy section of a plane flown by blind pilots. There seems no way to land, no way to turn around, no way even to communicate with those willful fools at the controls behind the locked cockpit door. And a kind of fatalism has set in. Waiting for the Bush administration to end in order for change to occur is an option one hears proposed in casual conversation – in other words, let’s table it. There are no precedents – certainly not Viet Nam: when we left Nam, that country prospered, the rest of the region stayed pretty much the same, and there were none of the long-term consequences that seem sure to ensue whether we leave Iraq or stay, build up or draw down: genocide (granted, the killing fields of the Khmer Rouge remained open for business, but they were never on our agenda), the further polarization of radical Islam and the diminishing secular Middle East, a huge increase in anti-American and anti-Western feeling and the concomitant terrorism that such sentiments might bring with it.

Compared to these thickets, what happens on a baseball diamond or a strip club or even a highway on which a revved-up Lohan or a Paris Hilton is demolishing the speed limit seem familiar, manageable, and entertaining, a welcome distraction from thinking those dark thoughts about a world that is wobbling on its axis. I don’t think the American pre-occupation with celebrity, then, is shallow and mindless. I think it’s an escape hatch, a survival mechanism, an attempt – probably a doomed one – to hold onto our collective sanity. Nero fiddling while Rome burns? Maybe he was looking for distraction too.
Posted by Unknown at 12:29 PM No comments: