I need to buy a new car -- or do I?  Our 2003 VW Passat, the best car we've ever owned, has 117,000 miles on it, and things are going wrong:  mysterious warning lights on the dash, like "Check Brake Pads," which the dealer's service department told us had appeared not because our brake pads were faulty, but only because they weren't made by VW, and, more alarmingly, "Check Engine," which usually means that the catalytic converter is failing and that the car won't pass inspection unless we spend thousands of dollars fixing it.

And yet . . . it runs like a dream.  It's totally comfortable; in fact, I bought it because its driver's seat had so many possible configurations that I no longer have to stop, get out and stretch after an hour at the wheel.  It has all-wheel drive, a necessity in the winter for our long, steep driveway, but it still gets 26 mpg on the highway, and its 6-cylinder engine, coupled to an automatic transition with manual passing gear, is smooth, quiet and powerful.  And I love its bells and whistles:  memory buttons that adjusts the seats and mirrors for each of us when it's pushed; a computer under the speedometer that can tell you how long you've been driving, how far you've gone, how many miles till you run out of gas, what your current gas mileage is, and the sex of your unborn child.

It looks a little stodgy and old-fashioned, though, and parking it in the city has covered it with scrapes and dings, so for the past year I've found myself looking at other cars.  I'll be driving the Passat down Hands Creek Road and a brand-new Subaru Outback or Acura RDX comes sailing past, and I'll be filled with carlust.  And here's the thing:  I feel guilty.  As if I were married to the Passat but surreptitiously checking out younger, hotter women.  Shopping for a trophy wife.  I know what you Freudians are thinking:  that this is really about Nancy, not the car.  That's utter bullshit.  I look at other women all the time (they're lined up outside my office every morning) and never feel any guilt at all.

Nancy and I have gone so far as to test-drive that new Subaru, and in many ways it's terrific:  roomier, better gas mileage, more ground clearance (we got stuck in our own parking area in January when the snow was over the Passat's bumper), and a jaunty style.  But will I be happy with the 4-cylinder engine, which is a little buzzy and doesn't have quite enough oomph?  Will I be able to adjust the front seat to cradle me in the manner to which I've become accustomed?  And do I want to nick the piggy bank to the tune of $30K+ when I might get a year or two more out of the Passat?


I stay up nights worrying about these questions.  It feels like a life-altering decision, though it never has before; we've bought six new cars in the past 25 years, and nary a panic attack have I had.  Maybe my OCD is kicking in.  The salesman at Riverhead Subaru calls every couple of days, and I keep putting him off with lame excuses.  Someone, please, tell me what to do!
Posted by Unknown at 10:11 AM 2 comments: 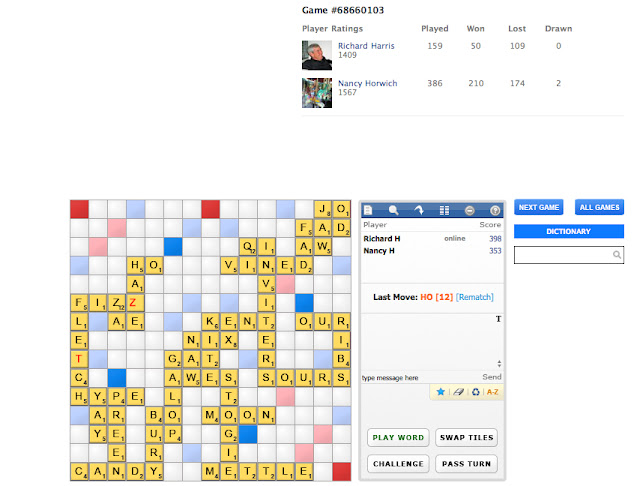 “Narrishkeit” means “foolishness” Yiddish (from the German “narr,” as in “narrenschiffe,” ship of fools)  – not quite “folly,” like investing with Madoff, but more the kind of  idiosyncratic nuttiness of which everybody has a few choice examples.  One that Nancy and I share is the way we play Scrabble.

From the beginnings of our relationship (back in what I think of as the early modern era), we’ve both enjoyed games, but there’s always been a problem.  When we were engaged, I tried to learn bridge, which Nancy had played in college; we had another couple as partners, a tyro and an old hand, and the whole thing was a disaster.  I’m a terrible card player and couldn't learn the game, and the other couple broke up over the acrimony and general fecklessness it engendered in them.  Nancy and I tried chess, but she was carrying around a lot of emotional baggage:  her father was the senior champion of the state of Michigan, who delighted in thumping his eldest daughter, and playing with me brought those repressed memories back with a vengeance.  Whatever we tried, ego intruded and bruised feelings ensued – except when we played Boggle with Danielle who, from the age of 17, has kicked both our butts every time.  (Not because of her enormous vocabulary; more because a big part of the game involves spatial relations, seeing various combinations, at which she excels).

But lately, Nancy and I have been playing Scrabble.  Well, not Scrabble – a variant called Lexulous, which is offered on Facebook.  The difference is that there are eight letters instead of seven and – most important – no challenges; if you make a word that’s not in the game’s “dictionary” (I use the term derisively and loosely), it doesn’t accept it and you can recant and make another word.

Where does the foolishness come in?  We could easily set up the Scrabble board and play face to face, but it works better for us to play online.  So Nancy sits downstairs in the living room on her Powerbook and I sit at my desk upstairs on my iMac, and when one of us has moved, he or she shouts, “OKAY!”  Talk about the machines turning us into machines!  But because there’s no eye-contact, no audible grumbling, no muttered imprecations, there are no hard feelings.  And we’re about equal in skill, so games are usually decided by who gets the good letters – the right combination of high-powered consonants and vowels.