A TALE OF TWO CITIES

Nancy and I were in Paris last week with the kids and grandkids.  I had been looking forward to seeing them, but Paris?  Not especially.  I've hardly spent any time at all there, and when I have, it was either freezing January or broiling July.  I have trouble understanding the machine-gun bursts of spoken Parisian French, and a good part of this trip would be spent with my son-in-law's many relatives, in suburban Houilles, where I anticipated mind-numbing language difficulties.  I had no interest in doing the tourist things; my most vivid memory from previous visits is lines longer than Disney World's.  And this, at least is still true; here's the Louvre on a weekday morning:

Of course, the food would be great, at least in restaurants, though we'd need a second mortgage to eat out.   And to top it all, the long-range forecast for that week was cool and rainy -- and so it was, except for one perfect, sunny afternoon when the two of us went to Roland Garros for the second day of the French Open, buying grounds-only passes from a scalper for a mere 300 euros.  That's euros, not dollars.

But something strange and wonderful occurred:  I fell in love with the city.  We were in Houilles twice, and the famille Bellenoue all came into town once, and I mean all -- 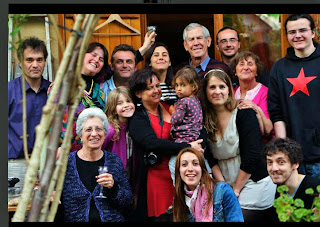 and the more time I spent with them, the more charmed I was.  Most of the conversation was indeed in  French, but they took pains to speak slowly and distinctly, and they were amusant and interessant, and they cooked us a wonderful day-long meal, and it was the first time we'd ever met any French people who weren't waiters or cab drivers or hotel clerks (except for a girl named Jeanne, in Cassis, when I was 19, but that's another story).

The other thing that made the week special was that instead of staying in a hotel (which really would have required a second mortgage), we rented an apartment.  It had three bedrooms and two bathrooms, the latter feature not typical of the city's housing.  It was in the 1st, just up the street from the Jardin des Tuileries, which had a nice playground for the kids, and though it was on the Wrong Bank (the Right; we'd have preferred the Left), it was perfectly situated to bring everyplace we wanted to go within walking distance -- the Musee d'Orsay, le Marais, St. Germain, Sainte Chapelle, restaurants that Benoit and Danielle could ferret out, where we ate the best meals of 2013, for less than $100 (that's dollars, not euros) a couple.  We walked our feet off, miles and miles, past the famous landmarks and into neighborhoods I'd never heard of, and I loved every step of the way.

And the Right Bank ain't so stodgy after all.   Look at these pictures:  the first was taken from the window of our NY apartment, on the Upper East Side, a very desirable location, and probably New York's equivalent of the Rive Droit: 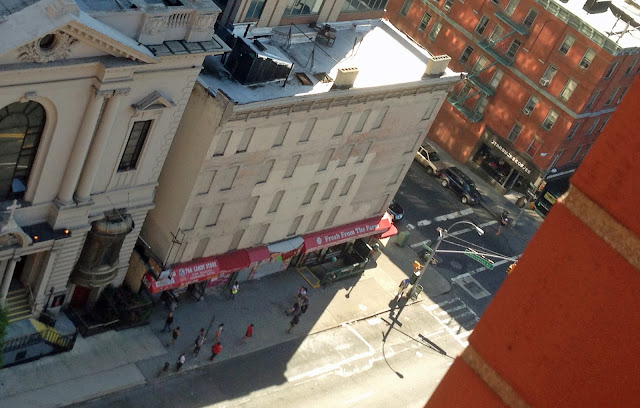 What we see, across the street, is an undistinguished church and a gutted building containing, from left to right, a newsstand, a shoemaker, a frozen yogurt place, a farm stand, and of course, across Lex, a Starbucks.  Here's what the Marche Rue Ste. Honore´ looked like from the terrace of our Paris apartment: 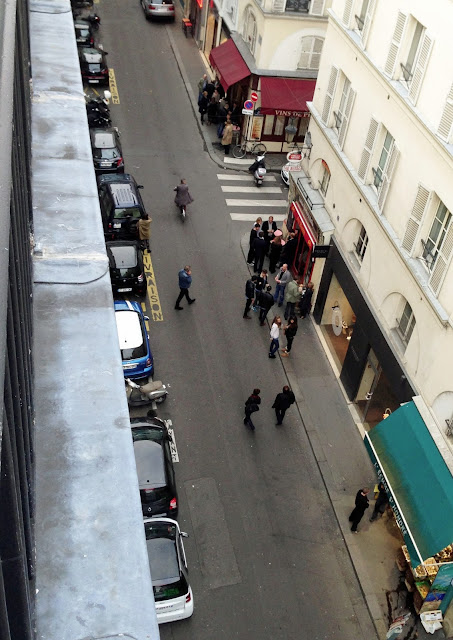 The store with the green awning sells every kind of oyster you've ever heard of.  On the  corner, elegant young Parisians are converging on the mecca of a small bistro; across the street, more chic citoyens are congregating at a little bar that every evening trundles out a bunch of barrels and puts checkered tablecloths over them.  Bicycles and scooters predominate; the parked cars seldom move, so the street is quiet enough to catch snatches of conversation floating up.

And all this has been here all my life.  It was never a problem falling in love with London, and our friends Jeff and Linda, who live in Rome, plugged us into that wonderland, but now, only now, do I get what Balzac and Proust and Woody Allen have been proclaiming.  Might have to make this reunion an annual affaire.