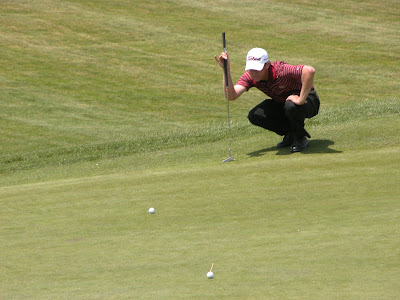 Standing next to the ninth green at Montauk Downs State Park, I squint to make out Paul Dickinson, one of the club’s assistant pros, preparing to tee off a quarter of a mile away. Paul makes an apparently effortless, perfectly balanced swing. I don’t see the ball until it lands in the fairway, almost 300 yards from the tee. When he reaches it, he hits an iron shot so high it appears to have escaped earth’s gravitational field; finally, it decides to land seven feet from the pin. Paul brushes in his birdie putt.

No big deal; he’s been making birdies here most of his life. Golf ran in his family: “When I was a kid, my dad bought me little golf clubs, and I’d hit a whiffle ball around the house,” he says. Born in Montauk to a clan that goes back four generations (his grandparents owned Deep Hollow Ranch and managed Third House), he and his folks moved to Texas when he was eight, but he came back to Montauk every summer.. After playing college golf, he tried to turn pro, but the game didn’t always come easily; at one point, he felt like the marginal golfer who famously said, “I’m not good enough to make it, but I’m too good to quit.” Paul tried other, more conventional jobs, but the pull of golf always brought him back and he was highly motivated by his late brother, stricken by cerebral palsy, who inspired him to make the most of his talent. Now, at 33, he’s playing better than ever. He credits much of his recent success to Michael Hebron -- part swing coach, part sports psychologist – who teaches at Smithtown Landing CC.

Nine holes is all Paul has time for on this day; he’s a busy man. He typically rises at 4 A.M. and puts in some computer time related to become a head club pro – a fallback position in case Plan A (becoming a professional golfer) doesn’t pan out. By 6:30, he’s working on his game at the club, followed by giving lessons from 8 to 4, aand a lunchtime workout with his trainer. After his last lesson, he’ll play some a few holes, have dinner with his wife Nicole and two young sons – “I try to separate my golf from my time with my family,” he says – and he may even go back to the course to practice until it’s too dark. Most nights, he’s in bed by eight o’clock. He has virtually no social life aside from widely-spaced restaurant dinners with Nicole. When does go out, he told me, ruefully, “People I know give me a hard time – ‘You haven’t been around in two years!’”

Nicole is “more than supportive” of this grinding regimen, as is Kevin Smith, head professional at Montauk Downs, who allows Paul a flexible schedule. One great round will get him into this year’s U.S. Open, the second of golf’s four “majors,” to be held at world-famous Pebble Beach. Paul won the local qualifying round at Noyac in Sag Harbor last month, shooting a 67, and there are spots waiting for four to eight of the 120 entrants at the 36-holes-in-one-day sectional qualifier, in New Jersey this month.

But Paul’s long-term goal is to become a member of the PGA Tour itself. He has friends who have made it and are doing well, like Zach Johnson (who won the Colonial Invitation on May 30th), so he has an idea what the ambience and level of play up there are like. His ultimate ambition, he says, is to win a PGA tour event, not just for the million-plus-dollar purse but because that’s the crowning achievement of any golfer’s career.

Whatever his success in qualifying for the Open, he’ll play several events this summer, and the cost of travel, plus the entry fees, adds up. Since Paul is, in addition to being a prodigy, a patient and talented teacher and one of the most personable guys around, he has a big rooting section at Montauk Downs, and lots of people buy tickets in fund-raising raffle there. Paul’s quest is very special to the Downs community, because it would validate the local golfer community who play at what is, according to Paul, a “spectacular” golf course – long, hard, and in beautiful condition, in a class, says Kevin Smith, with the great local-area private clubs like Atlantic, The Bridge, Maidstone, and National. If Paul Dickinson makes it to Pebble Beach, you’ll hear the cheers all the way from Montauk to the Shinnecock Canal. 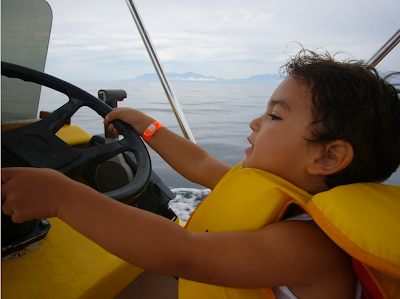 How often have I bitched and moaned about Utila, where Danielle lives -- its inaccessibility, its lack of cultural diversions, its removal from the civilized way of life available to children who grow up in New York, as I did and Danielle did. How often have I disapproved of Maxim's lack of access to the museums, the plays, the concerts, the private schools?

On the other hand . . . neither Danielle nor I got to drive the boat when we were three years old.
Posted by Unknown at 4:56 PM 2 comments: