RULES OF THE ROAD 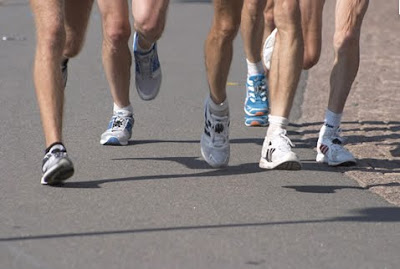 THE RIGHT (LEFT) SIDE


It makes me crazy, as I drive or bike around the East End, to see so many walkers, runners, strollers, moms/nannies pushing baby carriages, sometimes two or three abreast, on the right side of narrow shoulderless tree-lined and therefore shadowy roads – Stony Hill Road in East Hampton comes to mind -- which is the wrong side of the road for them. Their backs are to the traffic. Often they’re on their cells; if not, they’re listening to their iPods, as I bear down on them. Often it’s twilight. Often they’re wearing dark clothing. Come on, people! Don’t you want at least a fighting chance at surviving an encounter with a motorist who is blinded by the sun or the darkness or fiddling with his own phone or music player?

When I come up on a hapless pedestrian, though I know it stamps me instantly as a curmudgeon who is to be either ignored or given the finger, occasionally I can't resist the urge to slow down and try to reason with the 16-year-old girl or the portly middle-aged fellow inches from my right fender. “Safer to run facing traffic!” I’ll yell through my lowered passenger-side window. The other day when I did this, a woman pushing a stroller gave me a thoughtful look, said “Thanks,” and, I watched her cross to the left side in my rear-view mirror. I was so happy, I almost ran down a runner a hundred feet further on. 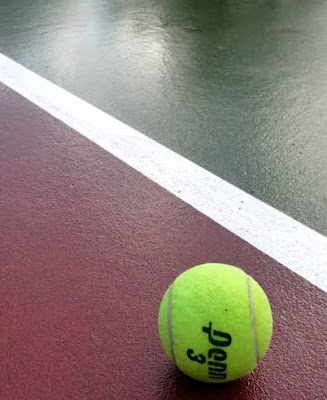 What's on my mind today is Fate. To be specific, the fate of a single, nondescript brown moth that landed its bedraggled self on the steaming tennis court whose bench a friend and I were sitting on between games. No sooner had the moth touched down than, as if in some infernal Rube Goldberg device, a tennis ball detached itself from a lesson being given two courts away and trundled, slowly but very straight, toward us and the moth. And as its momentum expired, it homed in on the fragile creature and with on its final turn, like some fuzzy juggernaut, ran over it. It was sheer coincidence, of course, but the vector was so precise that it felt like something else. What would the last thought of the moth, had it been sentient, have been? Something like, "Of all the gin joints in all the wor--"
Posted by Unknown at 10:29 PM 2 comments:

ROMEO AND JULIET IN AFGHANISTAN 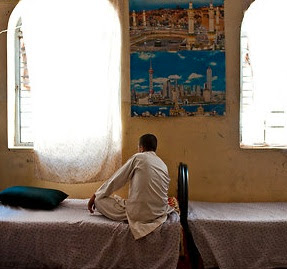 The Times headline read “Afghans Rage at Young Lovers; A Father Says Kill Them Both.”

The bare facts are these: two teenagers “of different ethnicities” –- Rafi (pictured above in his prison cell) is Tajik, Halima is Hazara (guaranteeing that a marriage between them would not have been arranged by their parents) -- tired of meeting in secret, obtained a car and eloped, heading for a courthouse where they intended to marry. They had driven only thirty feet when a group of men stopped them, pulled them into the road, and interrogated them: what right had they to appear in public together? “An angry crowd of 300 surged around them, calling them adulterers and demanding that they be stoned to death or hanged.”

Police arrived, and a riot ensued, in which one man was killed. The kids were spirited off to jail (undoubtdly the safest place for them), where they languish at present, awaiting trial. There is no indication that they had engaged in, or were engaged in, any activity more culpable or subversive than sitting companionably together in an automobile.

“Why can we not marry each other, or love each other?” the 17-year-old Halima asks, from her prison cell.

If this sounds familiar, perhaps its because the narrative’s outlines conform so perfectly to those of Romeo and Juliet. That is, depending on how it ends, we might well have cause to describe this story as a tragedy. Except that, in Shakespeare’s play, only two characters display anything like the fanaticism that seems to characterize the Afghan social milieu -- Juliet’s hot-headed Tybalt (who indeed thinks Romeo should be put to death, by himself) and Juliet’s father, in a single scene in which he loses his temper volcanically. The deaths of the young protagonists come about because of a series of miscalculations and fatal coincidences: Romeo kills himself because he believes Juliet dead when she is in fact living, and Juliet kills herself when the Friar, who is by her side in the family mausoleum, is spooked and runs away. The parents, at the plays end, mourn their children and erect statues in memory of them.

But in the present case, the girl’s uncle visited her in prison to inform her that she had shamed the family, and that they would kill her once she was released. Her father stated, “What we would ask is that the government should kill both of them,”

What’s happening in Afghanistan seems to me less than tragic and worse than tragic. Tragedies are about heroic attempts to defeat overwhelming odds, in which the dignity and seriousness of the hero’s (or heroes’) downfall produces in us a complicated blend of admiration, sadness, and resignation. I don’t know about you, but all I can feel about this is rage and a sense that human culture and the bonds of family as we know them have somehow been suspended. There’s no dignity, no heroism, no sense of individual fate playing itself out. Two children are about to be crushed by an ideologically-driven machine, and there seems to be no way of stopping it. (Of course, the law is always a machine, blind and capable only of quantitative judgments; that’s why Cocteau titled is version of the Oedipus story La machine infernelle.) The genre that fits here is not tragedy but irony, whose point of view is such that it reduces human life to a meaningless shadow-play. Macbeth described human life as a tale told by an idiot, signifying nothing. The lives of Rafi and Halima, in their culture, apparently signify nothing. It’s not a tale told by an idiot; it’s a tale about idiots.
Posted by Unknown at 5:41 PM 18 comments: