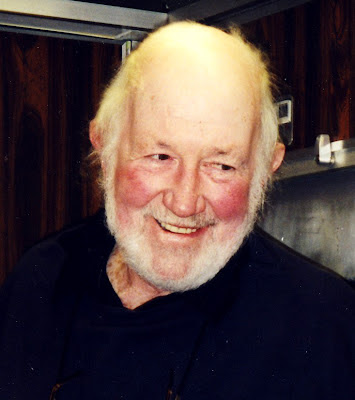 My old friend Bob Bochroch died last week. This is the obit I wrote for him in The East Hampton Star.

Robert Bochroch, of Northwest Woods, East Hampton, died of heart failure at the hospice in Southampton Hospital on February 28th.

After graduating from Lafayette College, Mr. Bochroch entered the Signal Corps and served overseas in the Korean War. He would further his education in later life, attending writing courses at Columbia and reading literature at Trinity College, Cambridge.

A stint with CBS Radio in Philadelphia led to a 25-year career as an account executive with WABC-TV, during which he divided his time between New York and East Hampton.

Mr. Bochroch -- Bob to his countless friends -- conducted a life-long love affair with the automobile. Early in his life, he raced sports cars at Lime Rock, Sebring, and Watkins Glen, and in 1970 became President of the Bridgehampton Racing Group, which was dedicated to reviving the Bridgehampton Race Track. His passion for the open road culminated in 1984, when he and his close friend Bob Sinclair, driving a turbocharged Saab Aero prototype, finished seventh out of 76 entrants in the grueling 8800-mile-long race known as One Lap of America. He was justifiably proud of the fact that they collected only one speeding ticket as they circumnavigated the country.

Bob also loved to travel, particularly to countries known for their cuisine. His wife’s career at TWA enabled him to take more than 20 trips to France, dining in three-star restaurants and acquiring the knowledge and sophistication that made him an extraordinary cook. Perhaps the first East End resident to install a Garland restaurant range in his home, he gave famous dinner parties at which his geniality, wit, and wonderful food endeared him to his friends. His kitchen was his theater. Sipping aperitifs and slathering home-made terrine de veau on crusty bread while sitting at the bar that framed his workspace, his guests could chat with him while he put the finishing touches on his classic boeuf bourguignon or coq au vin.

He was first married to Patricia Suransky, the mother of his three children – Robert A. Bochroch of Philadelphia, Lisa (Mrs. Frederick Erikson) of Williamsport, and Susan (Mrs. Robert Ratcliffe) of East Hampton. He is also survived by his second wife, Mary Joyce, whom he married in 1971, and with whom he raised his daughters locally, and by his grandsons, Frederick and Patrick Erikson.

Friends and family will participate in a celebration of Mr. Bochroch’s rich life at 1:00 P.M. on March 8th, at his home. In lieu of flowers, the family suggests a contribution to the East Hampton Day Care Center (PO Box 63) or to Meals on Wheels (33 Newtown Lane).
Posted by Unknown at 5:19 PM 2 comments: 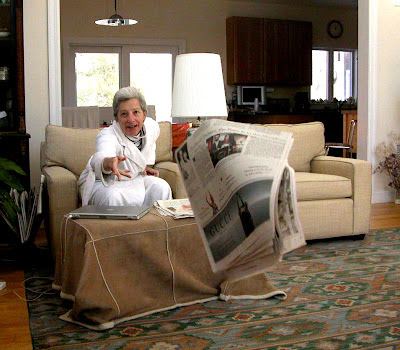 One of my most cherished routines takes place every morning. Nancy and I invariably rise at the same moment, and if we’re in East Hampton, what follows next is a ritual as unvarying as a Kabuki play. I go downstairs and into the kitchen, take out two small glasses, pour orange juice into them and then head for the front door. Nancy follows me, and makes eight cups of coffee in the Krups as I head down the steps, down the path, down the driveway, retrieve the Times, and repeat my journey in reverse. Sometimes, if it’s cold or rainy or snowy, I have to throw on a pair of sweats and a parka and real shoes, but mostly, I venture out in bathrobe and LL Bean mocs.

Re-entering the house, I make a beeline for My Chair, which is an oversized copy of the iconic Eames chair. So tyrannically do I assert my claim of possession that no one else (least of all Nancy) would dream of sitting on it, any more than a courtier, or even a wife, would have thought to perch casually on Henry VIII’s throne. I drop the Times on the ottoman, go into the kitchen, and we busy ourselves pouring coffee (Nancy’s black with sugar in one of her own mugs; mine with a drop of half-and-half, in a thermal cup). Nancy carries hers to a large, comfortable club chair facing mine; I set mine down on the little table next to the Eames, perhaps accompanied by a schmeck of something sweet, strip the wrapper off the Times, separate the first section from the rest and throw Nancy the Metro.

This business of throwing newspapers across the room has evolved over the five-year period in which we've lived in this house. At first, when it came time to trade sections, I would rise, carry what I had finished over to her, pick up what she had for me, and seat myself again, but there are always five or six sections, which is a lot of tedious messengering, and one day I simply flung Business at her. I did this with a wristy, backhand motion, as one would toss a Frisbee, and to my surprise, it sailed across the room – some twenty feet – and landed gently, intact, face-up, in her lap. That was beginner’s luck, of course, but what began as a whim became, with practice, a surprisingly effective method of delivery; now, hardly noticing that we’re doing it, we trade sections without ever leaving our respective chairs, the only sounds the occasional clinking of cup on coaster and the susurration of newsprint flapping through the air. Sometimes a section goes awry, separating or diving to the side or falling short, and the receiver hisses disapprovingly: “Error on the throw!” Surprisingly often, however, it works fine. Heavy sections are easier to throw accurately than light ones, but after years of practice, both of us can manage even something as flimsy as Getaways.

No one until now has known of, let alone witnessed, this strange marital game. It occurred to me, though, that many couples who are blessed with large living rooms must have developed routines similar or perhaps quite different to this one. So let me hear from you, fellow Times-Tossers! Maybe we can get a team together and qualify for the Beijing Olympics!
Posted by Unknown at 12:56 PM No comments: 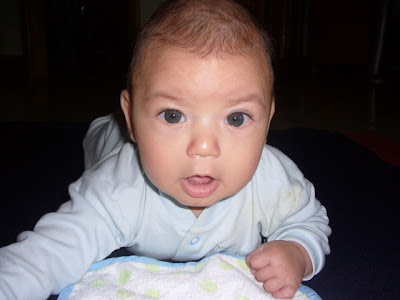 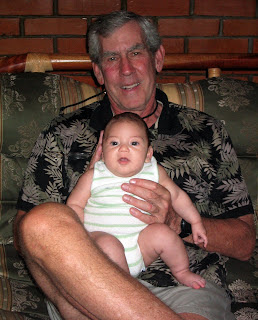 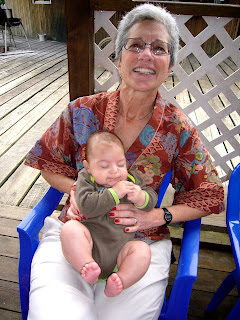 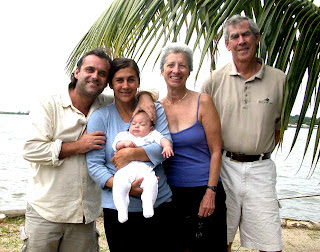 I'm the most inattentive blogger; not only can I not keep up with my own life, I can't keep up with my family's. And in the case of Maxim, of course, change is the order of each and every day. He just turned 5 months old, and looks nothing like he did when he was a child. So here are a few shots -- some from Christmas, when Nancy and I were in Utila, and some sent to us last week by Danielle.

Have I mentioned that D, B and M are coming to East Hampton for the month of June? One of the treats in store for Maxim will be meeting his cohort; so many of Danielle's friends in the States have just had or are about to have babies, we may be able to form a softball team. . . .
Posted by Unknown at 12:52 PM No comments: