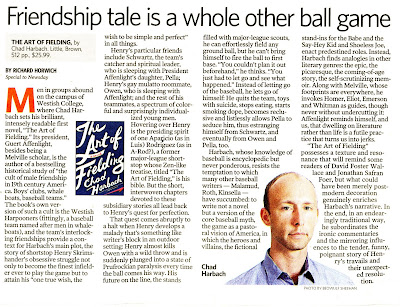 Men in groups abound on the campus of Westish College, where Chad Harbach sets his brilliant, intensely readable first novel, The Art of Fielding. Its president, Guert Afflenlight, besides being a Melville scholar, is the author of a best-selling historical study of what is described as “the cult of male friendship in nineteenth-century America . . . boys’ clubs, whale boats, baseball teams.” The book’s own version of such a cult is the Westish Harpooners (fittingly, a baseball team named after men in whale boats), and the team’s interlocking friendships provide a context for Harbach’s main plot, the story of shortstop Henry Skrimshander’s obsessive struggle not only to become the finest infielder ever to play the game but to attain his “one true wish, the wish to be simple and perfect” in all things.

Henry’s particular friends include Schwartz, the team’s catcher and spiritual leader, who is sleeping with President Affenlight’s daughter, Pella; Henry’s gay mulatto roommate Owen, who is sleeping with Affenlight himself; and the rest of his teammates, a spectrum of colorful and surprisingly individualized young men. Hovering over Henry is the presiding spirit of one Aparicio (as in Luis) Rodriguez (as in A-Rod?), a former major-league shortstop whose Zen-like treatise, meta-titled The Art of Fielding, is his bible, as Moby-Dick is Affenlight’s. But the short, interwoven chapters devoted to these subsidiary stories all lead back to Henry’s quest for perfection.

That quest comes abruptly to a halt when Henry (like several real-life ballplayers – Steve Blass, Steve Sax, Chuck Knoblauch) develops a malady that’s something like writer’s block in an outdoor setting: Henry almost kills Owen with a wild throw and is suddenly plunged into a state of Prufrockian paralysis every time the ball comes his way. His future on the line, the stands filled with major-league scouts, he can effortlessly field any ground ball but he can’t bring himself to fire the ball to the first base. “You couldn’t plan it out beforehand,” he thinks. “You just had to let it go and see what happened.” Instead of letting go of the baseball, he lets go of himself: he quits the team, toys with suicide, stops eating, starts smoking dope, becomes reclusive and listlessly allows Pella to seduce him, thus estranging himself from Schwartz, and eventually from Owen and Pella too.

Harbach, whose knowledge of baseball is encyclopedic but never ponderous, resists the temptation to which many other baseball writers – Malamud, Roth, Kinsella -- have sucumbed: to write not a novel but a version of the core baseball myth, the game as a pastoral vision of America, in which the heroes and villains, the fictional stand-ins for the Babe and the Say-Hey Kid and Shoeless Joe, enact predestined roles. Instead, Harbach finds analogies in other literary genres: the epic, the picaresque, the coming-of-age story, the self-scrutinizing memoir. Along with Melville, whose footprints are everywhere, he invokes Homer, Eliot, Emerson and Whitman as guides, though never without ironically undercutting this technique; Affenlight reminds himself, and us, that dwelling on literature rather than life is a futile practice that turns us into jerks.

The Art of Fielding posesses a texture and resonance that will remind some readers of David Foster Wallace and Jonathan Safran Foer, but what could have been merely post-modern decoration genuinely enriches Harbach’s narrative. In the end, in an endearingly traditonal way, he subordinates the ironic commentaries and the mirroring influences to the tender, funny, poignant story of Henry’s travails and their unexpected resolution.
Posted by Unknown at 11:35 AM 2 comments: