GHOST RIDERS IN THE SKY 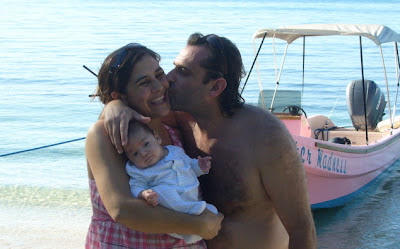 We left the island of Utila, where our daughter and her family live, on January 5th -- not without divine intervention.

In an attempt to shorten the long and arduous trek, we opted for the 3-leg route instead of the usual 4, even though it cost twice as much: from Newark to Houston to Roatan (a larger neighboring island with an international airport) to Utila, the last jump via chartered plane. No problem going there, in perfect weather; the Cessna 172 (4 seats and a single engine, about the size of a lawnmower’s) covered the 20 miles expeditiously. I monitored its progress via the instruments from the co-pilot’s seat: altitude 900 feet, airspeed 80 mph.

But going home was a different story: rain pelting, wind blowing. We got to what passes for an airstrip on Utila, a cracked and rutted length of pavement about 400 yards long, at eleven A.M. and to our surprise, there was the Cessna. The bad news was that the airport in Roatan was closed, and there was another couple ahead of us. The flight from Roatan to Houston was due to take off at 2 PM, and flew only once a week.

We cooled our already damp heels. Another passenger arrived, a young woman with, it seemed to me, much too much luggage to fit in the Cessna. At 11, the Roatan airport opened and the Cessna pilot, after carefully inspecting the runway, which was full of puddles, pronounced his intention to fly. He loaded up the other couple and told us he’d be back for the three of us in an hour. We watched as the tiny plane lurched and splashed its way down the runway, struggling to become airborne, and narrowly cleared the trees at the end.

The rain intensified. The puddles became ponds. We abandoned hope of the Cessna’s return. But all at once, much too soon, we heard engines in the sky. A large twin-engine plane, painted a snazzy blue, with the words “Central American Airways” stenciled on its tail, landed smoothly and taxied to the shed where Nancy and I and the young woman waited. “I guess this is for me,” said she. As the purser (!) opened the compartment door, I saw that there was not a single passenger aboard. “Where are you going?” I asked him.

“Will you take us?” I queried.

The answer was not a foregone conclusion. He pondered the matter. His piercing gaze sought my own. “Only,” he said, “if you pay cash!”

We struck the bargain, boarded, and were in Roatan fourteen minutes later. The Cessna was still on the ground; we explained what had happened to its pilot, and he gave us his blessing. The couple he had ferried over earlier were standing on line to pay their airport departure tax; the double-take they gave when they saw us was worthy of a Mack Sennett comedy. “How . . . how. . . ?” They had landed only ten minutes earlier.

We made our flight to Houston with an hour to spare. When I got back to New York, I googled Central American Airways, my new best friends. What came up was a company located in Louisville that charters fancy jets. I consulted lists of all the airlines in Central America, in the Western Hemisphere, in the world. Nada. I can only conclude that some tiny part of my atheistic soul was praying for deliverance, and the prayer was answered. Thank you, CAA – whoever you are.
Posted by Unknown at 4:44 PM No comments: