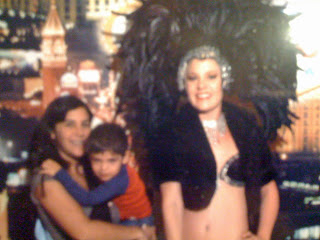 Danielle, Maxim, and Maxim's new friend
What happens in Vegas doesn’t necessarily stay in Vegas.  We met up with our kids and grandkid there (Benoit had a DEMA convention to attend), and though I summoned my most imperious scorn for the occasion, it wasn’t half bad.  Since we were last there (23 years ago), big changes – the old, tacky town of run-down ex-luxury hotels has been razed and rebuilt, and the new places – the Bellagio, with its fake Eiffel Tower, Wynn and its new neighbor Encore, Bally’s – are monumental in scale and opulent in amenities.  The people are still pretty tacky, though, especially those poor souls who sit all day in front of slots, endlessly pulling the lever with no hope in their eyes.  We did very little gambling.  The hotel gave us $30 in free chips, just to get us hooked; Nancy put them all on Even at the roulette table; 16 came up; she took her winnings and walked away.
The food was a revelation.  We ate at a Thai restaurant called Lotus of Siam, which we learned about from the Times article heralding the opening of its sister eatery in New York, and it was, as promised, the best Thai food we’d ever encountered – in fact, some of the best food we’d ever encountered.  And Sen of Japan was as good as it gets, too:  wonderful, inventive sushi at a third the price of Nobu.  The reason we went so heavily Asian is that Danielle, living as she does in Honduras, goes without for months at a time, and being pregnant, she has cravings we’re only too happy to satisfy.
And there was a terrific golf course across the street from out hotel, where I played three successive days.  I think the whole city must be economically depressed; resort golf at only $80 a pop is almost unheard of.  So, all in all, one of the best family vacations ever --- even if, unlike our better-connected friends the Patells, we did have to fly coach.
Posted by Unknown at 12:45 PM No comments:

My friend Deborah challenged me to revive my blog by posting every day for a month.  I won't be able to do that (we'll be computerless in Vegas  later this week), but le't see how close I can come. 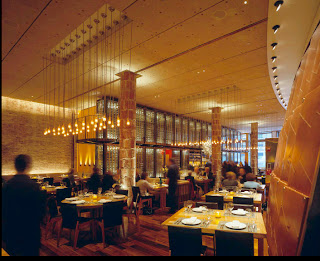 Last night was Nancy's birthday, and we went with the aforementioned Deborah and husband Cyrus to Tom Collichio's much-touted Craft.  Daughter Danielle ate there a couple of years ago and raved.  But it seems Craft has strayed from its original concept -- create-your-own-meals by huddling with someone who functions as a sous-chef -- and now offers, simply, an a la carte menu, which is another way of saying very expensive food.  What's new and different about choosing an app, a main course, and sides?  The short ribs were terrific, but at $38 the portion was a bit skimpy, and needed to be fleshed out with cippolini onions and roast potatoes, each about $11.  Things start to add up, and though the ingredients are top-quality and the preparation faultless, we left feeling a little empty, both in the stomach and wallet departments.  .
Posted by Unknown at 12:12 PM No comments: