How remiss I have been!  Why should anyone bother reading my blog if I’m not going to write it?  But I’ve been very busy, and at last have something to write about.  I’ve been working as dramaturg on two – count them, two – plays over the past month:  the Green Theater Collective’s production of The Tempest and Shakespeare@Hitfest’s production of A Midsummer Night’s Dream.

GTC is a tiny group dedicated to performing Shakespeare in minimalist fashion with as smalll an ecological footprint as possible .   Only six actors (here are two of them) 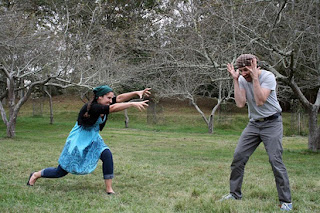 performing in an orchard, without a stage, lighting, or costumes, doubling and tripling roles, cutting the play to 90 minutes.  Their director is the incredibly talented Sarah Hankins, and it was a privilege to sit wih her and the cast and discuss the play, contributing whatever I could.  Its run is only six shows, in two venues, and this is the only aspect of the project I wish were different.  They’re like an itinerant bunch acting company in the 16th century, putting on plays for whoever will watch, solving production problems on the spot, improvising when they have to, and this is, for me, echt Shakespeare – the real thing.

By contrast, Sh@hitfest's Midsummer is a full-dress, 17-actor juggernaut which will run for most of August in Bridgehampton, staged in the athletic fields behind the high school.  I’ve worked with the director, Josh Perl, several times, but only when he was acting (Julius Caesar, Macbeth, Hamlet, all at the John Drew Theater in East Hampton); this is a whole new relationship.  A dramaturg has variously been defined as "the director’s bitch" and "a powerlesss smart person," and in this case, it’s more the latter; Josh and I often disagree on what the text says or means, or whether the actors should make that their primary focus, and so far my batting average is fairly low.  Sarah Hankins revered me and hung on my every word. I know Josh really likes me and appreciates me but he’s more about staging than about academics.  But the play is taking shape; there’s a lot of talent in the cast.  Here are some rehearsal pix: 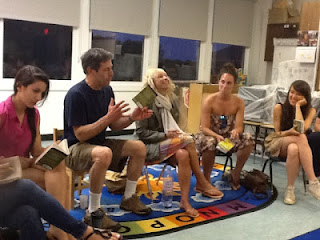 Josh Perl expounding to the cast 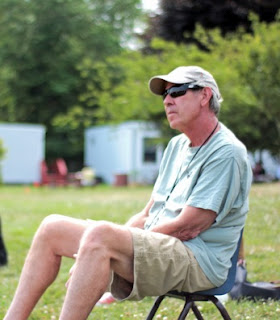 The dramaturg keeping an eye on things

One pleasant surprise is that one of my former NYU students, and a prize student at that, Kea Trevett, is not only playing Helena, probably the largest and certainly the funniest role in the play, but is living with me and Nancy for the summer.

She keeps thanking us for our hospitality, but having her around is pure pleasure.  She takes up next to no space (in any dimension) – deals with her own needs (she’s a vegetarian), leaves the kitchen spotless.  My favorite part of the day is when she and I get home from rehearsals and have a nightcap with Nancy, and we do a debriefing.  She's so smart and funny!   Too bad she's as ugly as a bear.  (Well, that's how Helena describes herself in the play, anyway.) 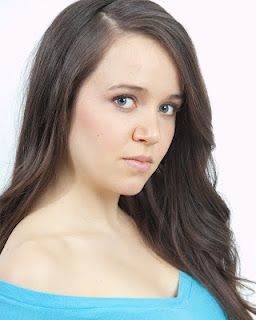 Nancy and I have adopted her as a second daughter, whether she likes it or not, and it will be lonely out here when she leaves, though three weeks later the real thing -- Daughter #1 + family arrive -- for an extended stay.

Opening night is August 2nd.  If anyone reading this would like to see the play, we’ll be there.  Details at http://mndhitfest.blogspot.com/.
Posted by Unknown at 1:09 PM 1 comment: