DOWN AND OUT AT THE EDGEWOOD SCHOOL 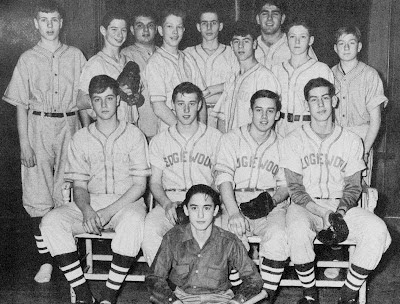 Who else would carry the following baggage around for almost half a century?

If you have no interest in baseball, stop reading here. If you're an obsessive fan, or a former ballplayer, you might find this interesting.

Have you ever heard baseball announcers refer to someone as a "five-tool player?" That means he can run, catch, throw, hit for average and hit for power. There are very few five-tool players, even in the major leagues: Alex Rodriguez, Ichiro Suzuki, Albert Pujols, Vladimir Guerrero and a few others. When I played high-school baseball, I was a two-tool player: I could make the scoop at first base, I could inside-out the ball to right field (.319 senior year), but I couldn't run worth a damn, I had no power, and (at last I arrive at my subject) I couldn't throw.

First basemen don't have to throw often, which is why I was positioned there. But whenever I did have to make a throw (usually to second or home, which is a short, easy toss), the ball would leave my hand looking good but then sort of . . . die. It seemed to lose its way, its will to live. It would slow down, sink, and swerve to the right -- every time. I worked on my throwing obsessively, but nothing ever changed, and I took this as simply more evidence that I had little athletic ability.

But that turns out not to have been the case. For some reason, when I gripped the ball to throw it, I placed my fingers along the seams, like so: 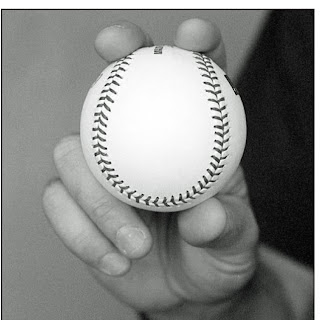 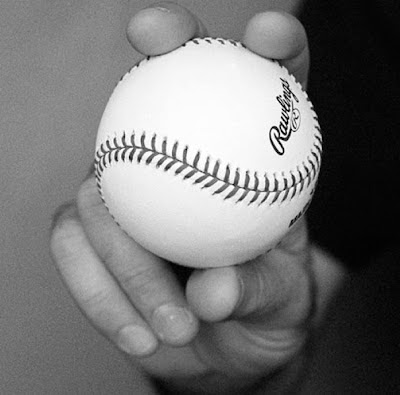 -- it would have flown straighter, harder and truer.

What rankles me is that my coach, Bob Kondracki, had been a professional ballplayer -- a pitcher! -- in the high minors. Coach Kondracki was a genial, laid-back sort of guy, not too bright, but willing to tell us endless funny stories about life in the Class AA, sort of like the movie Bull Durham. This man watched me bounce throws in the dirt for three years, shaking his head each time, and never once thought to examine the way I held the baseball. It was only when I was in my 40s, playing catch with a friend (still using my old first-baseman's glove and a ball hit by Stan Musial in batting practice at Shea back in the 60s), that I experimentally discovered the amazing results of gripping the ball across the seams.

Today, this could not happen. Kids are drilled obsessively in fundamentals from Little League on, and they're adepts by age 10; they have all the techniques and nuances of style down pat. Every peewee in America, stepping up to the plate, calls time by extending his back hand, palm out, to the umpire while he digs in, just like Derek Jeter.

I'm fundamentally opposed to Little League, with its uniforms, its competitiveness, its jealous, ranting parents and beleaguered coaches. What happened to playing the game for fun? But Coach Kondracki, what happened to coaching?
Posted by Unknown at 12:01 PM No comments:

THE SEMIOTICS OF PARKING

NO STANDING
EXCEPT
COMMERCIAL TRAFFIC
METERED PARKING
3 HOUR LIMIT
8AM – 7PM
EXCEPT SUNDAY
<----------------->
So read the parking sign on First Avenue in the 30’s. It was five in the afternoon, and I’d been circling the neighborhood for twenty minutes, and immediately beneath the sign was a space, meter and all.

But this was New York, and the sign was an unreliable signifier. Ever notice the complete absence of punctuation and lower-case letters from street signs, so that one must guess where sentences end and begin, based on nothing but hunch and whatever devious clues can be gleaned from line breaks?

So it is not enough to read according to the rules of English grammar. One must also commit what in my circles is known as the Intentional Fallacy, which holds that reading a text in order to discover what its author intended it to mean – as opposed to what it actually means – is improper. For how can we know what was in the mind of, say, Shakespeare, who has been dead for 400 years, or some anonymous toiler in the local DOT office, who may well have received an inferior education, deficient in instruction in the techniques of expository prose, but who is nonetheless charged with the responsibility for wording communications such as this one. Or who may be a dropout from grad school in English, who knows exactly what he’s doing.

Thus my reading of the sign had to depend upon my reading of the signer and his purpose, which might have been to make clear what the parking regulations are or, alternatively, to boost revenues by tricking motorists into parking where they should not through verbal ambiguity and Jesuitical equivocation.

My default guess is always that the intention of the Traffic Department is to thwart, bully, and extort, and I’ve always been right so far. I knew that if I parked in that spot I’d get a ticket that would cost me $110.

And yet . . . by my reading, the sign said it was legal to park there. It makes two separate statements, I believe. The first says that only commercial traffic may stand in the area governed by the sign; all private vehicles must keep moving, at all times on all days. "Standing" means something different from "parking": it's parking plus, moving your car to the curb but not leaving it. The second statement is about parking (that is, locking your car and leaving it at the curb). The implied period after the sentence “No standing except commercial traffic” makes that statement complete and self-contained. The following statement – a paraphrase of which would read, “Metered parking is available to all for up to three hours between 8 AM and 7 PM, except on Sunday, when anyone may park for any duration without paying,” is not dependent on the early statement about who may stand and who may not, either grammatically or logically. It was 5 PM; it was a Monday; therefore, I was entitled to park at the meter if I paid for two hours, after which I need not pay until the next morning at 8 AM.

As I pondered lonely as a cloud, I noticed a cop car idling at a pump at the end of the block. I pulled up next to him, rolled down my window, and said, “Excuse me, officer, is it legal for me to park here?” The exemplar of New York’s Finest to whom I spoke, a burly man with, appropriately, a five o’clock shadow, looked at me as if I were being a wise guy. “Didja read the sign?” he asked? “Yes, I did,” I replied. “Then you know ya can’t park.”

For a moment, I thought of engaging him in earnest discussion. Then I asked myself what happens to people who come off as elitist and condescending to cops, and I nodded briskly, rolled up the window, and drove slowly up the avenue, looking for the nearest garage.
Posted by Unknown at 3:46 PM 4 comments: