MY PROBLEM WITH ISRAEL 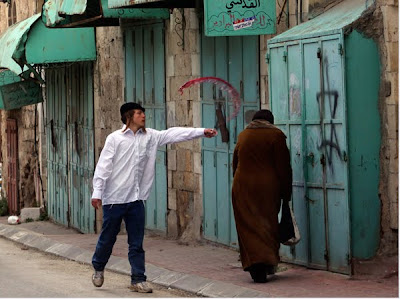 I'm a secular Jew. But my father's family wasn't secular. My grandfather was a founder of the Zionist movement, and my father, who was fluent in Hebrew, lent his support to the Irgun in 1948. So, in my half-assed way (never been there, never planted a tree), I've always wanted Israel to flourish, and for Palestinians to abandon their insane insistence that it disappear. But the Palestinian in the picture doesn't conform to my mental image of Hamas fanaticism. She looks like a defenseless old lady with troubles of her own who's resigned to being bullied by an Israeli thug with nothing better to do than test her patience. It's always bothered me when Europeans (particularly Brits, because I'm an Anglophile) side with the Palestinians, as when Vanessa Redgrave made her famous remark about "Zionist hoodlums"at the Academy Awards, as when British universities recently tried to shut Israeli professors out from international scholarly discourse. But if this picture shows us what it's like to be a Palestinian on the West Bank, I begin to comprehend the urge to lob a few rockets at Israeli settlements. Why is the guy walking around with a glass of wine in the middle of the day, anyway? Getting wasted? Or looking for a target of opportunity?
Posted by Unknown at 11:12 PM 2 comments:

REVIEW OF THE LIVING ROOM AT MAIDSTONE, E.H. STAR 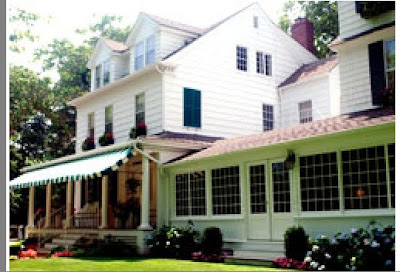 The inn formerly known as the Maidstone Arms has pruned a couple of its limbs and re-opened simply as Maidstone; the dining room has metapmorphosed into The Living Room. Change is obviously the order of the day. On a recent weeknight, four of us investigated chef James Carpenter's take on "New American with a Scandinavian twist." The Maidstone's website is proud to claim the restaurant's inclusion in the "slow food" movement, which is not a warning about the service but a commitment to everything that "fast food" is not -- they use locally grown produce, they smoke their own Norwegian salmon, they use sustainable ingredients like the salmon caviar that appears in several dishes, and there are eco-friendly touches like filtered water in place of the bottled stuff.

The restaurant is a little on the tight side, the tables slightly too small for the freight they have to bear, the servers forced to slalom through the spaces between them. But our waitperson was attentive, friendly and knowledgeable; when we asked a question about the food that she couldn't answer, she went back to the kitchen and got the information from the chef. We did have to ask (just once) for bread and for our second glass of wine to be poured, but on the whole the waitstaff coped well with their full house. The sound in the room was bright but never approached the kind of eardrum-puncturing din that some other restaurants register and even promote.

The wine list is weighted toward American wines, many of them local, with an excellent selection in the $30-50 range. We started with an old favorite, Wolffer's crisp and fruity rosé, which we drank with the appetizers, and then moved on to an excellent Castellare Chianti Classico, neither of which broke the bank. At those prices, it makes more sense to order by the bottle than pay double digits for a glass. There are some more formidable European vintages as well, for those who require them, of course; that's where a restaurant's profit is.

It's in the appetizers too, all but one in the two-figure range. We passed on the spinach soup garnished with a hard-boiled egg filled with caviar, though it sounded interesting, and opted for four from the menu, all of which were winners. We had a roasted beet salad with Valencia oranges and fennel, the sweetness of the beets offset by a little wedge of Camembert sitting on top. Then came Swedish råraka, tiny potato pancakes like Mother's, only better, garnished with crème freche and salmon roe, though $18 for four silver-dollar-sized cakes seemed excessive. This was followed by a dish that promised some drama: tarte flambé with Norwegian smoked salmon and crème freche (also $18); we were a little disappointed to find that it was essentially just a pizza, "flamed" in the kitchen, not at the table, but a couple of bites of its thin, tender crust, the creamy, salmony topping baked in, mollified us. Everyone's favorite app, though, was the fava bean ravioli in tomato bacon broth, the ravioli itself, perfectly tender, surrounding its fragrant filling, a relative bargain at $16.

But the main courses proved to be the weakest part of the menu. Only one -- the roasted rack of lamb with basil-infused crust, at $34 -- pleased all our (admittedly carnivorous) palates -- the lamb full of flavor but not gamy, and cooked precisely as specified. We dutifully ordered the vegetable Napoleon (the cheapest entrée on the menu at $24) so as not to shortchange our vegetarian readers, and while there were things to like about it, particularly the garnish of fresh figs that kept it awake, it was just a plateful of vegetables -- carrots, asparagus, several different roots -- in no particular arrangement. And though they were fresh and tasty, all of us would have preferred them to have been cooked a little longer, though we recognized that the crunch in the carrots was a purposeful choice by the chef, not a miscalculation. The pan-roasted halibut (a pricey $32) similarly suffered from uninspired presentation -- asparagus, carrots, cauliflower purée and a nicely browned, moist piece of fish sharing the plate like neighbors who are not quite friends. Finally, we opted for a piece of Scandinavian whimsy: "Veal Oscar" ($36), named for King Oscar II of Sweden, a 19th-century ruler who apparently enjoyed surf and turf. In The Living Room's interpretation, a tender, flavorful piece of sauteéd veal shared space with a shelled lobster claw and a smattering of sauce Bearnaise. Traditionally, it's made with flecks of crabmeat, which might have promoted better integration of the meat and seafood; as it was (here we go again), the ingredients, though individually delicious and well-prepared, didn't really meld into a coherent whole. Maybe we'd all have been happier with the special of pan-seared diver sea scallops, or the Flat Iron steak (that's from the steer's shoulder, also known as Top Blade, which, along with hangar and skirt steaks, is vying these days with the Porterhouse and shell cuts so beloved by steak-house frequenters), at $38.

At this point, we were neither unhappy nor thrilled, but the best was yet to come. Laura Donnelly, the Star's main reviewer and food columnist, doubles as The Living Room's pastry chef, and she's an inspired baker. Out came her creations, one better than the next -- the Catapano Farm sweet goat cheese tart (not too sweet, nor too tart); the Chocolate Trio (chocolate hazelnut tart, mocha mousse and chocolate mandarin sorbet, a dissertation on the variety of chocolate's tastes and textures), a raspberry and peach crisp with ginger streusal and homemade ice cream that left us gasping with delight. We also ordered a selection of ice creams and sorbets and wished we hadn't, not because they weren't excellent (the Mandarin orange sorbet piercingly flavorful), but because it meant foregoing the warm lemon pudding cake with blueberry compote. The ice creams are $6; the other desserts $9 and worth it.

The Living Room is top-tier East Hampton dining, in the company of 1770 House, Nick & Toni's and Della Femina and the stunning newcomer, Rugosa. Like those restaurants, it takes food seriously, and like them, it's not cheap; we managed to spend $100 a person (though that, of course, bought an appetizer, an entrée, a dessert and half a bottle of wine, more than any of us would normally order). At this time, unlike the other restaurants mentioned, The Living Room does not offer a prix fixe menu. On our next visit, I think we'll choose our main courses more carefully, or possibly forego them in favor of two apps. We'll resist the temptation to order every dessert on the menu. And we'll give thanks that the new chef in town is good enough to keep everyone else on their toes.
Posted by Unknown at 4:21 PM 2 comments: 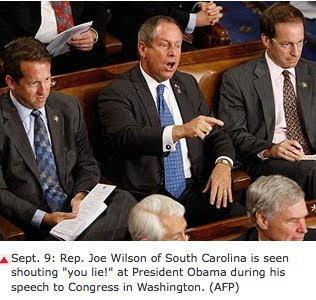 "You lie!" The ejaculation by Rep. Joe Wilson (R-SC) during the President's speech to Congress was accompanied, on screen, by looks of alarm and distaste on the faces of Joe Biden and Nancy Pelosi that suggested someone had farted. And the whole affair (including Wilson's totally disingenuous apology) has provoked a national debate on civility, or the lack thereof, in the discourse of American politics.

Rudeness is nothing new in the halls of government. Threats of violence and actual incidients of fisticuffs and caning and even duels to the death used to be common occurrences on Capitol Hill, and more recently, insult and invective have become the common currency of campaign rhetoric, to the point where no one is really surprised to hear Obama identified oxymoronically both as a socialist and a Nazi.

My Knee-Jerk Liberal response is to deplore the vulgarizing and cheapening of language and behavior, and to blame it largely on the Republicans -- well, on the extreme right-wing of the Republican Party, for whom hate speech is ofen a prelude to hate crimes (killing abortion doctors, for example). Sarah Palin announces that if Obama has his way, elderly citizens will be executed by "death squads"; Conservative talk-show hosts rile up the faithful to the point where a 9-mm sidearm seems an appropriate accessory for Americans attending a town meeting to discuss something as seemingly innocuous as the way to improve the delivery of health care. Democrats never behaved this way, I tell myself.

But it occurs to me that if they had -- if, while George II was making his bogus case for invading Iraq, cherry-picking or fabricating intelligence to support the laughable claims of cached WMDs aimed at Israel and the U.S., someone like Senator Hillary Clinton had risen during debate and in ringing tones told the President, "You lie," perhaps the slippery slope to war might have provided some traction to those (like Obama) who didn't believe Bush's claims but were, or felt, powerless to dispute them.

Bush, more than any other American president, tried (aided and abetted by Dick Cheney) to turn the office into an absolute monarchy -- to destroy the checks and balances on his power by neutering Congress, co-opting the CIA, and turning the Supreme Court (which, after all, installed him in the White House by skewing the results of the 2000 election) into an arm of the administration. But as the power of the President grew -- as he proclaimed himself not bound by Congressional limits on executive privilege, for example -- respect for him and for the office eroded. In 2003, Bush's opponents felt themselves were paralyzed by their respect for the office, if not the man. In 2009, Rex Rammel, an Idaho gubernatorial candidate, says he'd buy a license to hunt Obama and then claims he was only joking because "Idaho has no jurisdiction to issue hunting tages in Washington, D.C."

So, though it sickens me to hear people saying out loud and for attribution what was unthinkable before the New Millenium, I can't help wishing the process had begun ten years ago -- say, during the election campaign of 1999-2000. Al Gore is probably the last person one can imagine indulging in sicko verbal mudslinging, but there might have been other Democrats out there with poor impulse control and inventive vocabularies (Michael Moore comes to mind) who could have taught America just how lame, how unfit for the presidency, how untrustworthy and fundamentally dishonest George W. Bush was. And just maybe, if people of influence hadn't yeilded to the inhibitions that all civilized people used to share, we wouldn't be asking ourselves every day how we got into the twin messes of a disastrous war and a failed economy.
Posted by Unknown at 12:54 PM 1 comment: