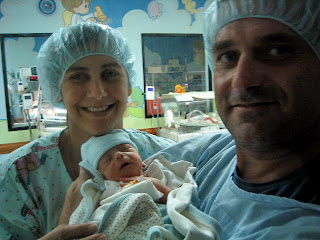 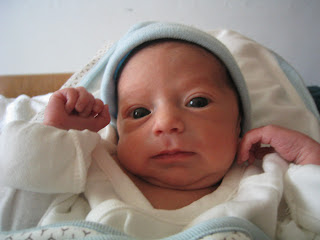 What is the point, I ask myself, of creating a blog and not posting anything on it for four months? Well, things keep coming up, especially in the last month or so, in which Nancy and I almost lost a daughter and did become grandparents.

As most of my readers know, Danielle’s pregnancy was complicated. I won’t go into the gynecology of it, but her OB had explained months ago that she would have to move from the island of Utila, where she and Benoit live, to La Ceiba, on the coast, where the hospital is, and that she would have to have the baby by C-section a couple of weeks before the due date – all this to forestall her going into labor, which would be very dangerous.

So wouldn’t you know that on September 16th, the week before the move to the mainland, around dinnertime, the placenta ruptured and the trouble started. Fortunately, their next-door-neighbor Phil and his girlfriend were home and their cooperation enlisted. Even more fortunately, the water was dead calm. They piled into Reefer Madness, the boat Ben had been keeping fueled and ready at the dock steps from their door, and with Ben and Phil navigating, and the girlfriend holding on to Danielle, they made it across the channel and into the waiting ambulance in a little more than an hour – record time, and fortunately so, for Danielle had lost two units of blood. The OB was waiting (in a dinner dress and heels), the C-section performed, and Maxim David Bellenoue came into the world.

And almost left it. Maxim was five weeks premature, and despite having received steroids in the womb, his lungs weren’t sufficiently developed to cope with earth’s atmosphere. Nor was the hospital sufficiently advanced to cope with Maxim; there was no neo-natal ICU, no pediatricians who specialized in his condition, and the tubes inserted into his lungs to pump air enriched with oxygen weren’t doing the job. He developed pneumothorax -- both lungs were punctured and partially collapsed. After a week of this, the baby clinging to life, the parents asking what more the doctors could do and being told that they should pray – an ultimatum: Max’s only chance was to be taken by private ambulance to the big hospital in San Pedro Sula, a hundred miles away over mountain roads. No one gave him much chance of surviving the journey. Danielle (fresh from surgery, and not the typical C-section but a procedure of greater magnitude) sat in the front, going quietly nuts with no way of communicating with Ben, who was in back with the baby and the staff.

But survive Max did, and now safely ensconced in a well-staffed ICU, attended by great doctors, he began to make his recovery. The holes in his lungs repaired themselves, the fluid was suctioned out, breast milk was added to his diet, and each day he got stronger. Nancy and I spoke to Danielle several times a day, and could chart the baby’s progress by the tone of her voice, as her anxiety gradually left her and was replaced by relief and the dawning thrill of motherhood.

Dan and Ben were living, by this time, in a two-bedroom apartment owned by the hospital, right across the street. On October 1st, Nancy flew down there and moved in with them. On the 4th, Maxim was discharged from the hospital and moved in as well. He’s still being seen daily by the pediatricians, being taught how to expel phlegm from his lungs, but he’s breathing, nursing, and solving simple quadratic equations by himself. Either next Monday, the 8th, or on Wednesday, the Bellenoue-Horwich entourage will make its way to Utila (whether by air or by van and ferry remains to be decided). To all of you who have showered us with your good wishes, baby presents, and requests for details, thank you! As soon as Nancy is able to send me the pictures she’s been assiduously snapping, I’ll post them on this site.

A final note: being Jewish only on my parents’ side, I don’t have an actual God to pray to, but I did cut some deals with the universe when things looked dark. One of the minor concessions was, OK, the Yankees can lose every game in the playoffs if Maxim starts breathing on his own. At this writing, the Yanks are down 2-1 to the Indians, a team they beat eight straight times in the regular season. And through some glitch, the Mets seem to have gotten roped in as well. So, it’s all my fault. Sue me.
Posted by Unknown at 12:56 PM 2 comments: