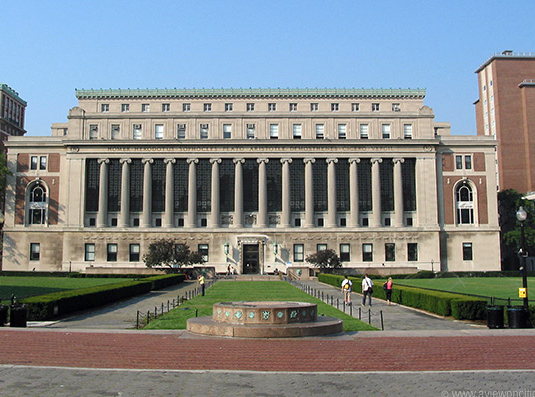 BUTLER LIBRARY, COLUMBIA UNIVERSITY
The above photo depicts a building that personifies, for me, the seven miserable and all-but-wasted years I spent as a graduate student at Columbia – the aloofness, the indifference, the elitism, the self-satisfaction of an institution that seemingly went out of its way to frustrate, depress and impoverish me and my classmates (with the exception of those who had graduated from Columbia College, who got all the grants and TA jobs).  Yes, I got a doctorate.  Everything I learned, I taught myself.
But I digress.  What I want to point out is something the low-res photo doesn’t clearly show:  the frieze of names that runs around all four sides of the structure, just above the columns.  That’s right, names.  Apparently, Nicholas Murray Butler, past president of the university and the man for whom the library is named, thought it would be appropriate to proclaim the university’s intellectual stance by featuring 18 dead white European males as a kind of proclamation:  this is who we are, this what we stand for:

HOMER  HERODOTUS  SOPHOCLES PLATO  ARISTOTLE  DEMOSTHENES  CICERO  VERGIL [sic] HORACE  TACITUS  ST. AUGUSTINE  ST. THOMAS AQUINAS CERVANTES  DANTE  SHAKESPEARE  MILTON  VOLTAIRE  GOETHE
The choices, I suppose, are predictable.  One might question the inclusion of Herodotus, Demosthenes, and Tacitus on the grounds of relevance and popularity, but it’s pretty much a syllabus of Columbia’s Core Curriculum, everything that the decanonization movement despised.  No women, no non-Westerners, no persons of color (well, a case has been made that St. Augustine was the exception to both of the previous categories), only one candidate chosen from the last four centuries of human intellectual endeavor.  But what interests me more than who is up there is the endeavor itself:  to simply list their names. There's an incantatory feeling about it; you don’t have to read or study what they wrote, just recite the iconic monikers, and you've been somehow Improved.
Interestingly, the 92nd Street Y adopted the same approach when it decorated the Kauffman Concert Hall, which dates from the same period (1930), with a similar frieze:
SHAKESPEARE  DANTE  ISAIAH  JEFFERSON  WASHINGTON  DAVID  MOSES
BEETHOVEN  LINCOLN  MAIMONIDES
The differences are more compelling than the overlap.  It's as if this upstart institution, founded by upwardly-mobile Jews in a then unfashionable part of the city, felt compelled to demonstrate its twin loyalties:  Hebraic tradition and lore are coupled with a declaration of loyalty to the history of the country that took them in.   The grandchildren of Emma Lazarus’s “wretched refuse of [Europe’s] teeming shore” had gained a cultural foothold, and were acknowledging their debt to its hosts, even as they asserted the equality of its own tradition.   Shakespeare, Dante and Beethoven are just filler -- default cultural markers, as it were.
But again, a kind of magic is at work, just as it is on 116th Street:  the sheer power of the names itself is presumed to do part of the work that is usually ascribed to rigorous thought and study .  It will improve us merely to saunter across campus or take a seat in the auditorium; we don’t actually have to enter the library or listen to a concert to be uplifted by Tradition.
Ben Jonson, in his wonderful play Epicoene, features a pompous fool named Sir John Daw (= jackdaw, a clamorous bird) who takes the same approach to learning:
CLERIMONT: What do you think of the poets, sir John?
DAW: Not worthy to be named for authors. Homer, an old tedious,
prolix ass, talks of curriers, and chines of beef. Virgil of
dunging of land, and bees. Horace, of I know not what.
CLERIMONT: I think so.
DAW: And so Pindarus, Lycophron, Anacreon, Catullus, Seneca the
tragedian, Lucan, Propertius, Tibullus, Martial, Juvenal,
Ausonius, Statius, Politian, Valerius Flaccus, and the rest--
CLERIMONT: What a sack full of their names he has got!
DAUPHINE: And how he pours them out!
Jonson’s name appears neither on Butler or at Kauffman.  Wonder why?
Posted by Unknown at 12:18 PM 1 comment: