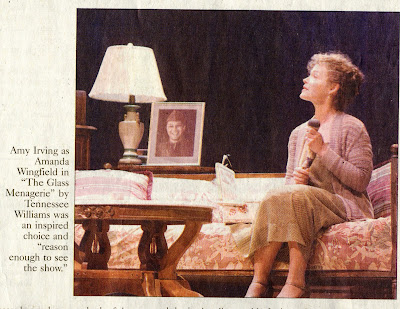 The newly-refurbished John Drew Theater at Guild Hall is presenting Tennessee Williams' The Glass Menagerie as its first full-scale production. And judging from the enthusiasm of the opening-night audience, both the play itself and its star, Amy Irving, were inspired choices.

It's possible that The Glass Menagerie was not the play, or even the kind of play, that Williams was trying to write. He thought of it as daringly experimental theater -- what he refers to (and even has one of the characters refer to) as a "memory play," at the opposite extreme from the "the straight realistic play with its genuine frigidaire and authentic ice cubes." Of course, straight realistic plays were and are the backbone of commercial theater (unless the theater is south of Houston Street in Manhattan), and aside from some faintly surreal and metadramatic touches in the lighting, music, use of a projection screen and on-stage narration, what Williams wrote was pretty much a slice of dysfunctional family life, set in a generic urban tenement neighborhood of St. Louis in the years just before World War II.

The Glass Menagerie introduces us to Amanda Wingfield and her two grown children -- Laura, the shy, ethereal daughter who walks with a limp and lives not in the rough and ready world outside the flat but in the ethereal realm of her delicate collection of glass figurines (the menagerie of the title), and her brother Tom, who supports them by working at a dismal job he despises, chafing under his mother's nagging and pretentions, spending hours each night at "the movies" (movie theaters that serve drinks, apparently), and dreaming of escaping to a life of adventure, like the runaway father and husband whose picture sits on a table in the living room. Amanda, too, lives in a dreamworld, the Mississippi delta of her girlhood, with its plantations and servants and lemonade served on the veranda where she made vivacious conversation with multiple beaux.

The Wingfields' desperation is palpable, especially Tom's, but it is tempered by the fact that the play is narrated by Tom from a future years later -- which is partly why Williams (and Tom himself) refer to it as a "memory play." Whatever lies in store for these people has already happened; Tom has escaped to the Merchant Marine, abandoning Amanda and Laura to their unspecified fate. Thus, everything that transpires on stage, however sad, acquires a patina of nostalgic recollection. The plot, such as it is, concerns Amanda's plan for her and Laura's survival: Laura, unable even to learn basic secretarial skills, must, in Amanda's view, find a genteel swain who will marry her and support both of them. This provokes in Amanda herself a constant reverie featuring honeysuckle trees, porch swings, and particularly that memorable day (it's a memory play for her, too) on which no fewer than seventeen "gentleman callers" came to call. Amanda describes these stalwarts in detail -- their brilliant marriages, the romantic duels they fought, and above all, the fortunes they made or inherited. But though they came to call, none of them stayed; Amanda fell for and married a penniless romantic wanderer who left her and the children high and dry in the alien world of gritty urban poverty (brilliantly suggested by Beowulf Borrit's half-realistic, half-dreamlike set) in which her memories and values now seem absurd and high-falutin'.

All of this works beautifully on the John Drew stage, thanks to director Harris Yulin's decision not to indulge the play's dreamy potential but to keep things moving smartly along. Sad though the story is, the acting is forthright and bold, and there are even some laughs along the way. Ebon Moss-Bachrach does a fine job with the difficult, somewhat underwritten role of Tom, half Mama's Boy and half adventurer; he is particularly good at the narrative monologues which stud his part, to which he brings a nicely sardonic edge. Laura's collection of little glass animals may have been meant to symbolize her fragility, but Tom seems fragile too -- a young man going nowhere, unable to leave and confront his destiny and equally unable to stay. Louisa Krause's Laura isn't too shy to establish a forceful and convincing presence onstage, and John Behlmann, the Gentleman Caller whom Tom recruits as a possible suitor for his sister, is just as Tom introduces him: a high-school hero struggling to cope with the cold, indifferent adult world.

But this is Amy Irving's show, and she gives a wonderful performance on many levels. You can see why she drives Tom crazy with her southern belle shtick -- she'll drive you crazy, too, with her voice alternating between stridency and melliflousness and her inability to keep her fussy hands off the lives of her children. But there's another side to her. Williams said, "There is much to admire in Amanda, and as much to love and pity as there is to laugh at," and Irving is the first Amanda who ever made me feel the latter as strongly as the former.

Amy Irving's performance is reason enough to see this show, but it's more than just a star turn. The Glass Menagerie calls for ensemble acting supported by carefully calibrated setting, lighting and music, and that's what's it get here. This is the play that made Tennessee Williams famous, and you're unlikely to find a production of it anywhere that's as good as the one that graces the John Drew's stage.

Richard Horwich lives in East Hampton and teaches English at New York University. He was for several years the dramaturg of the Hamptons Shakespeare Festival.
Posted by Unknown at 5:31 PM No comments:

THE MERCHANT OF VENICE, ACT SIX 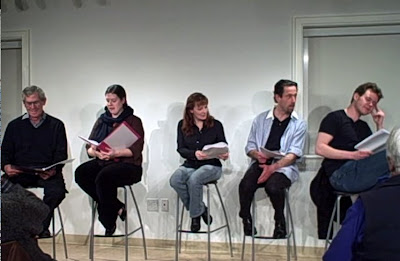 My secret life has been pretty much exposed: for the past two years I've been writing a play. Its working title is The Merchant of Venice, Act Six, which gives you some idea of both its content and, if you know me at all, how it dovetails with the rest of my life.

And I guess the title is self-explanatory: it picks up the action of Shakespeare's Merchant where Act 5 leaves it. But isn't that the end of the play, you ask? Well, yes, but Shakespeare's comedies are famous for their irresolution; there are always more questions than answers. That's why, back in the 1930s, the sub-genre of "problem comedies" was invented -- to describe plays in which the happy ending is problematic. The most famous examples are Measure for Measure and All's Well That Ends Well, but Merchant finds its way into the category by virtue of the fact that the three marriages that end it are each made at least as much for money as for love. So I thought it would be interesting to look at the three couples (plus poor Antonio, who at the end of the play is rich but single) a year later, and see what accommodations they've made.

The problem with my own problem play is that I couldn't have written a less commercial piece of theater if I'd set out to do it. Unless my audience is fairly familiar with Shakespeare's work, they'll have no idea what the questions to which I'm supplying answers are. So I've brought in a technological solution. I've set my play in the present, in order to make it possible for a huge TV monitor to dominate the set, and on this screen, periodically, excerpts from Shakespeare's Merchant appear, to introduce and provide exposition for my own scenes.

Whether this will work or not remains to be seen. The first half of MV6 was given a reading last March by The Naked Stage at Guild Hall in East Hampton, as part of an evening devoted to airing the work of new local playwrights. It was extremely helpful to me to watch and listen to an audience watch and listen to my play, and to hear their comments afterwards; I've spent the last couple of months revising. And of course, it was a thrill to hear my words spoken by real live actors -- Molly McKenna as Portia, Josh Perl as Bassanio, Melissa Herman as Jessica and Joseph Brodo as Lorenzo. I read the stage directions.

Where do we go from here? I've been sending the script to people who might be able to arrange for a reading or a workshop in New York. If there is an audience for this play, that's where it is -- the issues of both my and Shakespeare's take on Renaissance Venice have a lot to do with Jewish questions, and an audience already interested in intermarriage, dietary laws and circumcision would be of enormous help. Whatever the outcome, though, it's been fun to make a text rather than just interpret one.
Posted by Unknown at 11:20 AM No comments: