Like a lot of other people, over the years I've written poems for special occasions -- chiefly birthdays, weddings, anniversaries. Lest they be lost to posterity, I thought I'd better get them out there. (The dates have been omitted to protect those who are now aged and infirm.)

To Nancy, on her birthday

A lady turning thirty-seven
Deserves a little piece of heaven --
A gift, perhaps, that costs as much as
If she were a queen or duchess,
Or, at the least, a birthday luncheon
That’s fit for goddesses to munch on.
But best-laid plans of men or mice
Sometimes with fate will cut no ice;
Because my knee my weight won’t lift,
I couldn’t shop for any gift,
And cause Danielle last night went whoopsie
No birthday outing for my Poopsie.
Still, I can pen these lines to say
To wife and mom, Happy Birthday!


To Harry Wise, on his birthday

Ode: To the Late Harry Wise

It might be on the squash court
Or at a restaurant;
It might be at the tennis club
Or any local haunt.
If you’re a friend of Heshy’s,
Just try this on for size
You’ll spend some time there waiting for
The Late Harry Wise.

He’s booked a court for seven;
My watch says twenty past.
I’ve stretched and warmed up three times, now;
My temper’s slipping fast.
It’s 7:27;
Blood pressure on the rise --
Another piece of gamesmanship
By the Late Harry Wise.

I’ve hit upon a scheme I think
Might really be a winner:
Reserve a table -- nine o’clock --
When we go out to dinner.
Then tell him it’s for half-past eight.
“Eight-thirty sharp,” he sighs.
Who shows up at 9:45?
The Late Harry Wise.

A vision of the future dim
This morning came to me:
A doleful group of mourners
Standing funerarily.
The grieving widow, all the kids,
Each dabbing at their eyes.
Who’s late for his own funeral?
The Late Harry Wise.

But now, before that fateful day --
O many years before --
Your friends are gathered round to say
We wish you many more.
I hope you’re at the table for
This poetic surprise,
But I’ll start without you if you’re late:
Happy Birthday, Harry Wise.


For Mary Freeman, on her Fiftieth

Write a birthday poem that's funny
Says the note from Rappaport.
"Relevant" -- right on the money
(Just be sure to keep it short)
In a vein that's light and airy,
Something altogether nifty
To cheer up our good friend Mary
Who is closing in on fifty.

Fifty, you say Mary's turning?
Cannot be! No way, Jose´!
Though it seems we've known her always,
We just met her yesterday.
She's that young Cornell alumna
Lives off Lex on Ninety-fourth,
In a nice old roomy brownstone
Just a little too far north.

Taking courses toward her Masters',
Has a house at Lido Beach,
Has a husband who's a lawyer,
Has a daughter who's a peach.
Now a second peachy daughter,
Now a son, and now another --
Her career's on the back burner,
Mary's now a full-time mother!

Years are passing, bringing with 'em
Lots of joys and lots of debt;
They could use a private income
(Harvey now is with Korvette).
All that private school tuition,
Orthodonture, doctors' bills,
Even from the pediatrician --
Korvette's future's looking ill.

All at once we're in the eighties,
Harvey's building a hotel.
Mary's now in private practice,
Prospects rosy, life is swell.
But her kids are leaving home now,
And her friends are turning gray.
Time is passing much too quickly!
It's September -- where is May?

Yet it's not a time for panic.
Mary Freeman's here to show
How to pay with grace and beauty
Debts we all to Time do owe.
As our poem at last closes,
This is what it wants to say:
You're not getting older, Mary,
Simply better, every day!

For David and Jan Gordon, on their wedding day

Some loves last for now and ever,
Liz and Darcy, always true.
Some are sort of now or never --
Capulet and Montague.
But for you, all sunny weather,
Not a quarrel, not a rift.
May your happy days together
Last as long as does this gift.

For De Witt Snodgrass, who has just sent me his book of poems titled "Mexican Dance Suite" (mine is in the same meter)

I’m in love with your Mexican Dance Suite --
It’s a metrical, technical neat feat!
Let me add, though I’ve no urge to repeat,
It was fun from beginning to end.

And of course it was beautifully printed;
On typography, you’ve never stinted.
It’s a rare mix of arts, newly minted --
I’m honored to call you my friend.

Oh, but what will you do for an encore?
Say which popular forms will you next score?
Rap, rock, folk, heavy metal, or all four?
A poetic, synthetical blend!

I can’t wait to find out what you’ll do next.
Please, De, send me posthaste any new text.
I assure you, if not I’ll be sore vexed --
Now I’ll just say so long until then.

Dialogue with Danielle (literally; she wrote the first one, I the second, when she was in high school)

SHE:
You [my Socrates
Reflecting mirrored . . . moon]
Look here from afar;
I [the apprentice
Changing form of playdough]
Ride the falling star.

I:
I [your old man
inordinately fond of Q & A]
smile toward the mountains as
You [once apprentice, now disciple]
ride the flubber like an astronaut into the thinning air.
Falling stars burn out young, but rising ones
are hard to catch. Better just to listen as
they sing into space.


A Sonnet to Josh Gladstone and Kate Mueth, on the occasion of their marriage

To Josh and Kate, not one impediment
Would we admit. Their love’s too true for that.
Their wedding cup contains no sediment,
No sweat-mark stains the band of their love’s hat.
Despite the nepotistic state of mind
Involved in casting the director’s squeeze
As female lead in Summer ‘99
They handled all the challenges with ease.
So yet another HSF romance
Has blossomed here along with Heather/Dave,
Dave/Amy, and the others in love’s trance --
Gladstone and Mueth are fast each other’s slave.
They’ll bear it out e’en to the edge of doom,
But I, I find, have now run out of room.
Posted by Unknown at 12:57 PM No comments: 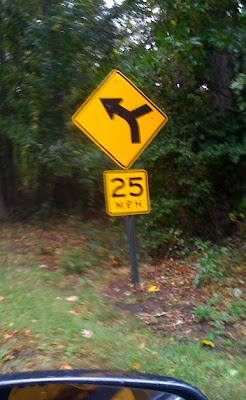 Suppose you were following my directions to our house in East Hampton, and I had told you to stay on Stephen Hands Path until it dead-ended. You're on that road and you come to a fork at which sits this sign. Which way do you steer?

Despite the clear indication that you should bear left, Stephen Hands Path is to the right.

I realize that I've been preoccupied by signs lately; this is my third blog on them. The first dealt with the inexplicable grammar of a New York City parking sign, and the second with a threatening billboard posted by the Southampton Police Department showing a cop aiming a radar gun as if it were a Glock.

Of course, all English teachers are interested in signs; we're trained as semioticians (semiotics is the study of signs; same root as in "semaphore"). But road signs are more than just a subset for me; they constitute an index to how much a local government prizes its citizens.

New York State spent a lot of money over the past few years on large, elaborate message boards displayed on its parkways and highways, designed to inform motorists on traffic conditions ahead. Virtually all of them have stopped working. The one on the southbound Cross Island Parkway, which lets you know whether the Long Island Expressway or the Northern State Parkway is moving better, has never worked. Now there are signs only a year old on the parkways that are supposed to give you the time in minutes to a particular destination depending on which of several routes you take, and only one in ten seems to be in operation.

In East Hampton, main thoroughfares are labeled at every intersection, I guess to reassure you that you're still on the same road you've been on (which comes in handy if you take the left fork on Stephen Hands). But only about half the cross streets are identified. What's that about? Is the reasoning that anyone who would want to go to McGurk Street already knows where it is? On Memorial Day weekend, the roads are like a demolition derby, as renters try to figure out where they are and how to get where they're going -- making U-turns, swerving toward and then away from intersections, screeching to sudden stops. The locals have no patience at all for these tenderfeet (who, of course, support the local economy single-handed); they tailgate them, leaning on their horns, laughing all the way.

I guess it's a lost cause in this economy; no one is going to undertake an ambitious program of studying and replacing all the signs on all the roads in the state. So my tip of the month is, buy stock in GPS; it's becoming indispensable.
Posted by Unknown at 2:34 PM 1 comment: