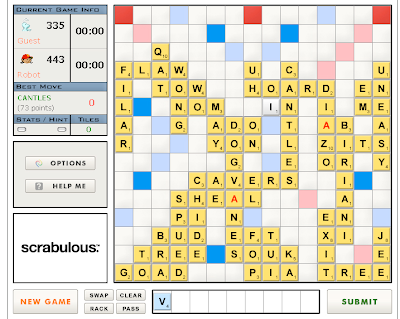 "All words labeled as a part of speech (including those listed of foreign origin, and as archaic, obsolete, colloquial, slang, etc.) are permitted with the exception of the following: words always capitalized, abbreviations, prefixes and suffixes standing alone, words requiring a hyphen or an apostrophe."

Those are the rules of Scrabble, perhaps the best board game ever invented, which has been around since the Great Depression and is now, as far as I’m concerned, over. I joined Facebook (under a pseudonym) solely because I wanted to play Scrabble on line, but whether I play another person or a computer (on a related cite called Scrabulous.com), I’m done in by those insidious Scrabble dictionaries (of which there are several) – lists of “words” (no definitions) that go by such names as Sowpods (how’s that for a word?) or TWL (Tournament Word List), that exist solely to help people cheat at Scrabble, and are the courts of last resort at Scrabble tournaments all over the world. Both were originally based on the Shorter Oxford English Dictionary, but clearly they’ve been corrupted: I have no idea under whose authority we’re meant to accept words like the following, which the computer on Scrabulous used against me in three games I played this morning: qadi, jun, azon, hooty, enuf, sheal and worst of all dogvanes, which earned a 50-point bonus as a seven-letter word. A check of the Oxford English Dictionary turned up none of these. It played spue (which I accept, along with the OED, as a variation of spew), but it refused to allow me to play spuer, which would have allowed me to connect to a triple. Fortunately, I had a d on my next turn, and played spued – for some reason, that passed muster.

What has happened, naturally enough, is that Scrabble enthusiasts have taken to memorizing lists of nonsensical neologisms. Sowpods includes a convenient list of two-letter words (invaluable for hooking your own word onto, so you can access a triple-word score) that includes ae (which is not a word but a diphthong), bi (a prefix), es, et, fe, mm, mu, pe, xu and za.

So what’s the point? I lost two out of my three games, and the computer’s biggest scores in each game came on words-that-are-not-words. And so corrupted have I become that in a game with my friend Ellen, I added a g to baron and made barong, a non-word that I found in SOWPODS and that gave me many points. It would have done her no good to challenge; it’s not in any dictionary of the English language, but is on Scrabble word lists. I was sickened by my perfidy.

So, I guess it’s back to checkers. Too bad. You had a great run, Scrabble, but, as Stephen Crane's Scratchy Wilson said to the sheriff, speaking of the passing of the West, “I expect it’s all off now.”
Posted by Unknown at 2:54 PM