My grandmother Yetta came to Saskatchewan from Odessa over a hundred years ago, speaking not a word of (what the Canadians call) English.  She eventually learned English, imperfectly, a rough-and-ready, heavily accented speech that enabled her communicate with the taciturn farmers who were her neighbors and later on, when she and my grandfather retired to Vancouver, the more cosmopolitan types whom she encountered.  But as she aged, her English left her.   She remembered her Russian perfectly, but at the end, she could neither speak to nor understand her children or grandchildren. 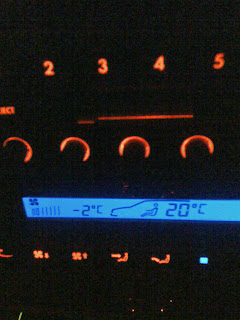 Similarly, my Volkswagen was born in Germany and emigrated to this country in 2003.  At the time, its various displays spoke English flawlessly.  But lately, as it's aging, the same process that made my bubbi revert to her native tongue seems to be taking place.  It's a European car now.  The readout above was in Fahrenheit until last week,
Posted by Unknown at 4:18 PM