In January, I returned from a week’s trip to Cuba and blogged about it – chiefly its architecture, which constituted a rich and detailed record of the island’s history over the past hundred years. The opulent, Europeanized villas; the splended Catholic churches; the public squares; the narrow warren of alleyways of Old Havana all gave way, starting in 1959, under the avalanche of Communism. The villas were given to the People, who couldn’t take care of them, and most of them crumbled into splendid, decaying old piles. The churches have slowly been colonized by Senterria, the local form of Yoruba folk religion. The Castro regime built blocks of depressing Soviet-style flats and monumental, faceless public buildings. But Old Havana remains what it was, and forms the core of a lively, West-friendly fun-loving culture that refuses to die.

Two weeks ago, I got back from a visit to a country so different from Cuba as to represent its diametrical opposite: Abu Dhabi, the wealthiest of the United Arab Emirates. And again, architecture has a story to tell. Abu Dhabi, unlike Cuba, has virtually no history; fifty years ago it was desert. And the indigenous culture, if it can be called that, is Bedouin, and therefore, by definition, fleeting and insubstantial, for the Bedouins were rootless wanderers.

Where Cuba is a very poor country, Abu Dhabi, which owes its existence to its enormous oil reserves, is rolling in wealth. A (somewhat oversimplified) profile of an Emirati is someone who has little or no education (why bother, when there’s no vocational motive?), doesn’t work (ditto), is waited upon by servants who have immigrated from other countries (and who live outside the city in what are called – I kid you not – labor camps). The typical family car is a Porsche Cayenne.

And the architecture? Monumentality knows no bounds in Abu Dhabi (it’s even more striking in neighboring Dubai). Ego-driven oil-rich sheikhs have, with no master plan or guiding purpose, created a city of enormous glass towers – apartment buildings, office buildings, hotels – quite indifferent to the fact that their occupancy rate is ridiculously low. There is no dominant style, unless whimsical fancy may be said to be a governing esthetic. Consider, for example, the towers pictured below, which are fairly typical: 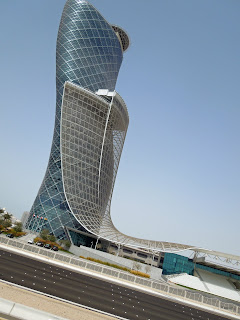 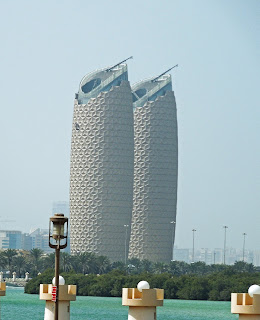 Bizarre? Tasteless? Look at the decor of the Grand Mosque. The exterior is impressive enough. . . . 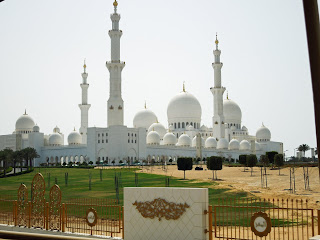 But the interior is tacky; it looks as if it had been furnished by a a policeman's wife in Nassau County. Who came up with this chandelier? 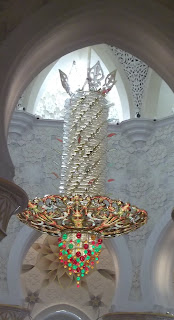 Here's the opposite number of that chandelier in the extraordinarily beautiful Hassan II Mosque in Casablanca: 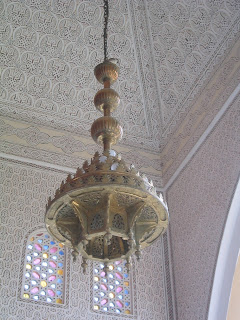 The physical setting of Abu Dhabi -- on the Gulf of Arabia, facing west toward Iran -- is stunning. But the Emiratis don't mix with tourists or expats; theirs is a closed community, but an untethered one: not truly Arab but not Western either. They've taken the worst of our culture, its obsession with material goods, and broken away from the best of Arab culture, its subtlety, intellectual accomplishments, and style. As of now, there's no "there" there.
Posted by Unknown at 1:10 PM