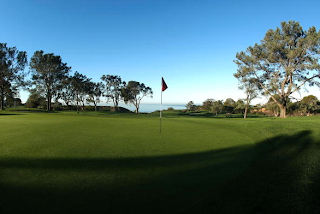 This is a photograph of a typical hole at the Torrey Pines Golf Course in San Diego, where the Farmer's Insurance Open was played in January. 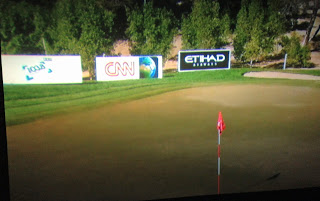 And this is a photograph of a typical hole on the Abu Dhabi Golf Club, where the Abu Dhabi HSBC Championship was played a week earlier.

Abu Dhabi, which is perhaps the richest country in the world per capita, wants a seat at the golf table, and is prepared to spend whatever it takes.  Apparently, they paid Tiger Woods and Rory McElroy, ranked second and first in the world, over a million dollars apiece to buzz in on their private jets and participate in the tournament. (Both of them played miserably and weren't around for the last two days of the four-day event.)

But the Emirates don't get golf.  One of the most appealing things about that much-maligned sport is the beauty of the courses themselves, oases of green and gold, mountains and pastures, lakes and rivers and oceans.  Golf courses are the formal gardens of the modern era; if you were a landscape architect, wouldn't you want someone to give you 300 acres of virgin land and a blank check?  In the United States, in the UK, in Spain, in Australia and New Zealand, there are stunning courses, many of them with seaside vistas that are so gorgeous it's impossible to keep your mind on the little white ball.   This is the 17th hole at Pebble Beach, on the Monterrey Peninsula of northern California:


You can see pods of migrating whales from the course itself.  The Abu Dhabi course is right on the Persian Gulf, but you'd never know it, at least from the TV coverage.  All you can see is advertising (and those signs, by the way, interfere with play, as you might imagine).


So why does AD, dripping with money, visually pollute what could be a major attraction?  Because money is what they know about and what everything in the Emirates comes down to, from the tallest building in the world to the so-called "souks" where, instead of interesting examples local artisanship (as in, say, Morocco) you're confronted with shlock.  The first thing you see in the biggest souk in Dubai (which is even more commercialized than Abu Dhabi, despite or because it's poorer) is rack after rack of T-shirts: 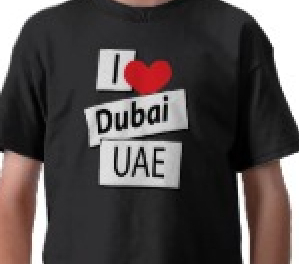 I spent a week in Abu Dhabi last year, courtesy of NYU's new humanities college there, and I was both fascinated and repelled by the place. Their path to Westernization seems to be the fastest of any country in the world; where fifty years ago there was nothing but desert, there's a city -- if a city is a place with enormous skyscrapers all built at the same time, and no neighborhoods.  Golf may not be the most important feature of a country's cultural life, but it's a handy barometer of the extent to which a society's values bypass esthetics and art in favor of money.