A TALE OF TWO (UNIVER)SITIES

What an odd academic career I've had!  My first full-time job after grad school lasted thirty years -- at Brooklyn College, part of the City University of New York, from which I retired, at the rank of full professor, in 1998.

I did so not because I wanted to stop teaching, but because I wanted to teach fewer courses to better students closer to home, which in practice meant become an Adjunct Professor at NYU.  The salary was minuscule, but I was very happy there, principally because I was spared the scut work of teaching composition courses, which made up the bulk of everyone's schedule at BC.  Instead, and inexplicably, I got to teach Shakespeare seminars because no one on NYU's permanent faculty was interested in doing so.

This year, NYU let me go.  They had hired two Shakespeareans, making me expendable, and were trying to rid their midsts of adjuncts, which is in a way commendable; too many departments nationwide depend too heavily on underpaid, overworked (and perhaps unqualified) part-timers to relieve the superstar profs of the tedious business of teaching undergraduates, grading papers, holding conferences.   The fact that I felt violated and desolated when I got the news that I was being let go (by email!) was beside the point.  I had fallen into the trap of thinking that, though my job description was "adjunct," my years as a professor put me on more or less equal footing with the permanent department.  Hadn't I published almost as much as some of them had?  Didn't I win NYU's Outstanding Teaching Award (seldom, if ever, awarded to adjuncts) in 2005?  Hadn't I been assured by several chairpersons that I was a valued member of the department?

But that was then.  My friends and supporters at NYU have retired, or transferred to the Abu Dhabi campus, or taken other jobs, and, as Willy Loman said to his boss, sealing his own fate, "They don't know me any more."

Not ready to leave the classroom, I got myself another job -- back at Brooklyn College.  Home is where, when you have to go back there, they have to take you in.  I'll be teaching a Core course next fall, and Shakespeare in the spring -- but I have no idea to whom.  I loved NYU's students, and a lot of them loved me back.  I don't know what I'll find at BC.  Probably enough bright kids to sustain a classroom discussion, but certainly a much higher proportion of what are termed "students in difficulty" -- clueless, unprepared, bored, desperate -- who will need a lot of special attention.  But will we be friends?  Many of my former NYUers -- hi Kea, Carol, Oz, Sarah, Heidi and Loidee -- are still my buds.  Only one of my BCers is -- hi, Ruth --  and she followed me to NYU to do graduate work and became my TA there.

Then there are the practical matters.  NYU is only 20 minutes away on the 6 train from my New York apartment. .  BC is about an hour away on the 5 train.  NYU is in the East Village, than which no neighborhood is more fun; BC is in Midwood, off Flatbush, which becomes quite dreary that far out.  NYU has Washington Square Park, which on warm, sunny days like yesterday is New York theater at its finest: 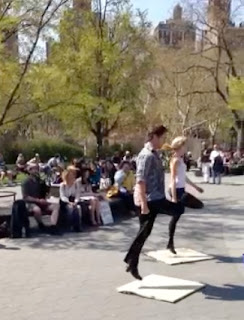 On the other hand, BC has a beautiful campus, one of New York's finest examples of Georgian Revival architecture, with its own little park, including a koi pond, that soothes the soul: 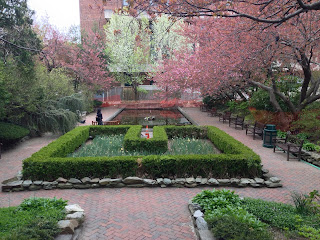 So maybe, in terms of environment, it's a wash.  I just don't know, and won't until September.  Isn't all change good?  On the other hand, is this a change, or just deja vu all over again?  I'll let you know in six months.