LIKE A MILDEW'D EAR: A TALE OF TWO CITYSCAPES 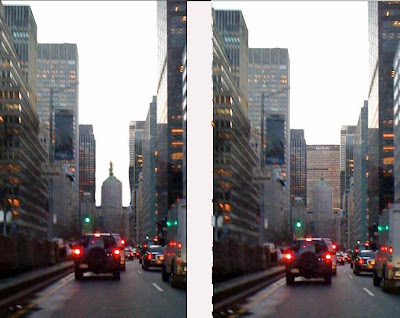 Driving down Park Avenue at dusk yesterday, stopped at a red light, I had Hamlet on my mind -- specifically the scene in Gertrude's bedchamber, in which Hamlet forces his mother to confront two pictures -- his father and her present husband -- in which his villainous uncle comes off far worse:

Look here, upon this picture, and on this,
The counterfeit presentment of two brothers.
See, what a grace was seated on this brow;
Hyperion's curls; the front of Jove himself. . . .
This was your husband. Look you now, what follows:
Here is your husband; like a mildew'd ear,
Blasting his wholesome brother. Have you eyes?

The light turned green, and I looked forward, down the avenue to its vanishing point -- which used to be the graceful silhouette of the Grand Central building, but is now the shapeless colossus of the Met Life Building just to the south, which (as one architecture critic said when it was built as the Pan Am Building in 1963), is wedged into the space it occupies like a fat lady trying to get through a narrow doorway.

So, like Hamlet, I superimposed the pictures of past and present, and came to the much the same conclusion: Park Avenue, whose terminus used to be as graceful as the Champs Elysee leading into the Arc de Triomphe, now simply hits a brick wall, so to speak. Lever House and the Seagrams Building, which had brought some architectural distinction to the famous boulevard, has been decisively trumped -- and not by the Donald, who later accelerated the process. The Pan Am / Met Life usurper, like Claudius, has irreversibly blasted its wholesome brother.
Posted by Unknown at 11:17 AM