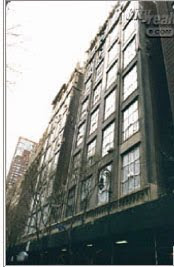 I’ve lived in many New York apartment buildings – I think the total is up to ten – but none of them more wonderfully situated than 2 West 67th, to which my parents moved when I was about 13, and which was my home away from home during prep school and college. Aside from fronting on Central Park, our building had the advantage of being situated directly across the street from the storied, landmarked 1 West 67th, better known as the Hotel des Artistes, built in 1916 as an artist’s cooperative (all the south-facing windows are double-height) and home, during its illustrious history, to Child Hassam, Isadora Duncan, Noel Coward, Norman Rockwell and Howard Chandler Christie who, in lieu of paying rent, executed the murals that graced the restaurant that, until last year, graced the main floor, the Café des Artistes. What he painted was a series of panels featuring naked woodland nymphs gamboling about a Grecian landscape, and I believe that the elderly woman who could be seen almost every afternoon during the 60's sipping an aperitif under one of the larger panels was the model he had used for all the figures 50 years earlier. 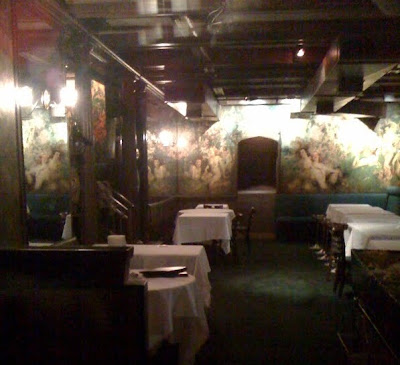 I’d never been inside any of the apartments until last night, when a very well-connected woman in Nancy’s pottery class threw a birthday party for a friend, the centerpiece of which was a piano recital by the composer Philip Glass, who filled the huge, stunning apartment with his own piano works. Sipping champagne as the music rolled in lushly around me, I marveled at the architectural details – the 25-foot ceiling, the kitschy second-floor balcony – and that wonderful mix of West Siders that no other neighborhood can boast, the multiracial academic/intellectual/bohemians of a certain age, leavened by a sprinkling of young men and women whose collective coolness was easily a match for lower Manhattan, a few toddlers, and an enormous cat who prowled among us as we listened. 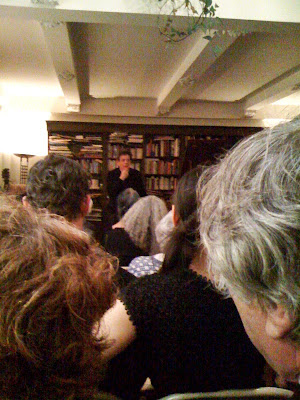 My people, I realized. I’ve lived on the East Side for 40 years now, and such a gathering would never have taken place on Park Avenue. Money on the East Side is stodgy; everyone wears a suit, and it would have been a charity event to be endured. Money on the West Side has style; everyone wears what they want, and it was a musical event to be cherished. I’m so glad, after all these years, finally to have found my way into a building in the same class, culturally and architecturally, with the Dakota and the
Osborne.
Posted by Unknown at 11:32 AM