"UP IN THE AIR" AND "PRECIOUS" 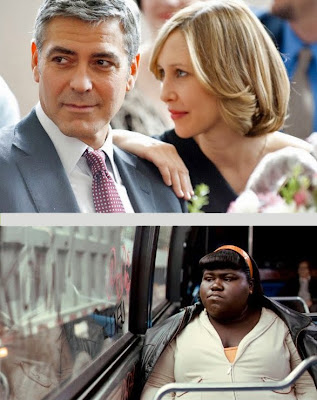 On New Year's Eve, Nancy and I stayed home and watched DVDs. I'd like to pretend that we turned down invitations to all sorts of glamorous parties because it's a long-standing tradition with us to view It Happened One Night every December 31st, but such was not the case. We went to a friend's house for a drink at 7, and were home by 9.

The friend's daughter, however, is a member of the Motion Picture Academy, and she offered to lend us "screeners" of two possible Best Picture contenders, Up in the Air and Precious (whose full title, annoyingly, no doubt for legal reasons, is actually Precious: Based on a Novel by Sapphire). We took and watched them both.

Disclaimer: Stop reading here if you haven't seen, and want to see, either or both of them, because I'm going to have to tell you a little about them to make my point.

On the surface, no two films could be less alike. Up in the Air is about Ryan Bingham (George Clooney) who has no life and likes it that way; he travels 300 days a year for his soul-destroying job (he works for a company that fires people for other companies), and he hates the days he's not travelling. The element in which he lives is the world of business class, airport lounges, car rentals, and hotels, all of which he enjoys mightily because his huge total of amassed frequent-flyer miles entitles him to upgrades in every department. He has no friends; he's estranged from his family; the only women in his life are one-night stands he meets on the road, and his only ambition is to become only the seventh person to achieve 10-million-mile status on American Airlines.

Precious is about a depressed 16-year-old black girl who lives in Harlem and faces a future so bleak it's painful to contemplate. She has a child with Down's Syndrome and is pregnant with another, both fathered by . . . her own father. She lives with her satanic mother, who abuses her emotionally and physically, screaming at her to give up school and go on Welfare, as she, the mother, has. And, though she fantasizes about herself as a celebrity, she's startlingly obese. At school, Precious is doing all right in math but she can't read the simplest of sentences. The second pregnancy causes her to be expelled, and just as she's settling into an alternative school, she discovers that her father has given her AIDS.

I had been looking forward to Up in the Air because it sounded like a breezy, sexy comic recreation for grown-ups. I had little interest in Precious because it sounded like something worse than tragic -- the inexorable downward spiral of someone whose life is insupportably awful and who never expected or had a shot at anything else. Wrong on both counts. What makes the films similar is that both Ryan and Precious blossom as the narratives unfold. Ryan reconnects with his family, saving his sister's wedding; he mentors his young assistant, who manages to teach him a thing or two about what's wrong with the business they're in; he meets a woman in an airport bar who turns out to be smart, funny, and interesting enough for him to abandon their transient relationship (meeting in hotels whenever their business travels intersect). He takes her along to the sister's wedding, and the relationship develops depth and human texture.

Precious, too, comes to life. Monosyllabic throughout the first half of the picture, she's taken under the wing of an extraordinary teacher at her new school, and she begins to read and write and talk out loud. This sounds like a lot of inspirational-teacher movies you've already seen, like Dangerous Minds, but it's not; such is the brilliance of Gabourey Sidibe and her mostly anonymous supporting cast that everything looks, sounds, and feels almost unbearably real. She rescues herself from her mother, moves into a halfway house, finds the courage to live with her disease, and at the end of the movie is well on her way to her GED and a life with some dignity and the promise of rewards in it.

Ryan is not so lucky. Breaking a cardinal rule, he surprises his new-found ladyfriend at home, and discovers she's married with children. He learns that one of the countless people he's fired on the job has committed suicide, and his career breaks into a thousand little pieces. Achieving his 10-million-mile status, he finds himself indifferent. The assistant goes off to a real job in San Francisco; the girlfriend says she's still up for intermittent escapist sex but nothing more; what passes for his home is a studio apartment in Omaha, where the movie leaves him contemplating the bleakest future imaginable.

So what begins as a feelgood movie turns out to be a downer, a story of a clever, resourceful, sympathetic man who loses his way in a life that has become a trackless wasteland from which he'll never emerge. And the movie that looks to be a heartbreaker is instead that rarest of beasts, a heartwarmer for adults, a story of someone who seems doomed but who will survive and if not thrive, at least cope. So in the end, they are, indeed, very different films, except in two ways: they have the same narrative structure, if not ending, and they're two of the best movies of 2009.
Posted by Unknown at 1:14 PM